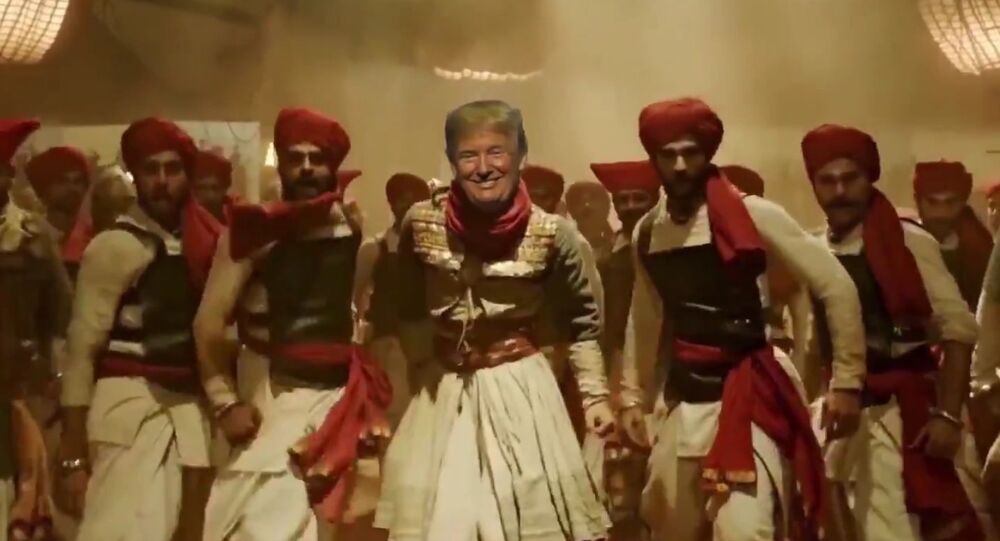 The song titled ‘Malhari' is from the Bajirao Mastani blockbuster historical movie, released in 2015. The ‘About' page of the creator's Youtube channel reads "I create memes for the enjoyment of all MAGA (make America great again) loving Americans who love this country, and love our President, Donald J. Trump!"

New Delhi (Sputnik) — A video meme of US President Donald Trump titled ‘Peshwa Warrior Trump' is going viral on the internet. The video features a Trump avatar dancing to a high-octane song ‘Malhari' with vigour and verve. The creator goes by the Twitter handle @mad_liberals.

© Photo : Instagram / realdonaldtrump
Trump Teases 'The Wall Is Coming' in Game of Thrones Instagram Meme
The original protagonist in the song and the movie is a warrior prime minister of the Maratha kingdom in south central India, named Bajirao Peshwa, who subdued the Muslim Mughal Empire of his time. The meme creator wanted to portray Trump as the ‘Peshwa Warrior'.

The video has been retweeted several times and the creator got some generous ‘showering of love'. One user was confused whether the meme was a mockery or something serious to which the creator replied, "Serious love for our president!"

Another user wanted the meme to have not just the US president but other Republicans too. To this @mad_liberals replied that he had actually done this but had to drop it because the final result was not that good. He added that at one point he had morphed everyone as Ted Cruz.

I actually did it. It took away from the video and I dropped it.

READ MORE: The Clap Heard ‘Round the World

The video meme was praised for its ‘hilarious' value. One tweet commented that ‘Peshwa Warrior Trump' made her laugh very hard and thanked the meme creator for making her feel ‘sooooo goood'.

There were several people who showered praise on the creator saying that he had done an excellent job.

I do quite a lot of video editing for my youtube videos, and I can see the effort that must have gone into making this, and syncing all the head movements. Brilliant effort.

Trump Sends Congress Report on US Strategy in Syria - Letter