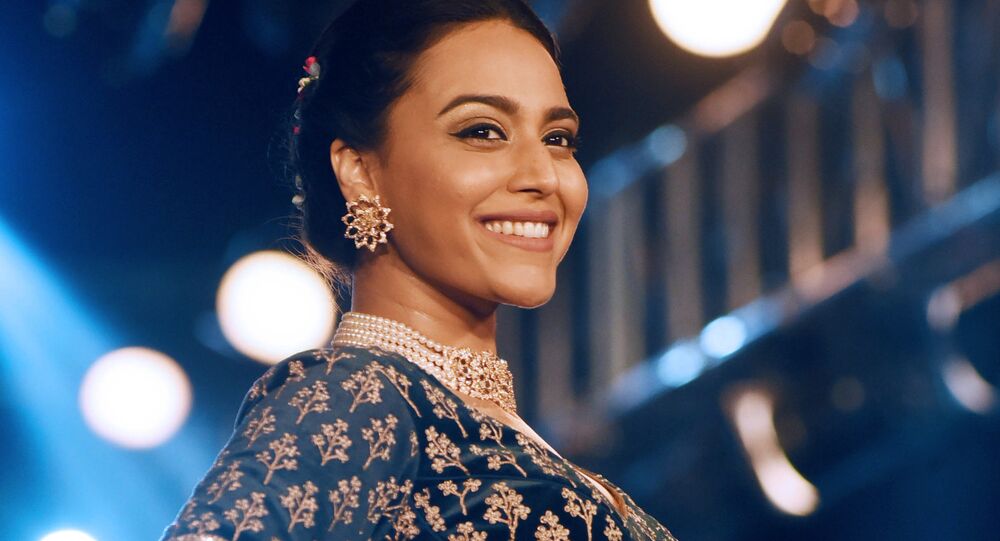 The cat-fight was fall-out from heated tempers following a terror attack on February 14 against Indian security forces at Pulwama in the troubled Indian state of Jammu and Kashmir and the subsequent aftermath.

New Delhi (Sputnik) — Celebrities from both sides of the India-Pakistan border have joined the post-Pulwama war-mongering hysteria, the latest being an online verbal duel between news anchor Kiran Naz from Pakistan and Bollywood actress Swara Bhaskar from India who have been seen locking horns on Twitter.

Pakistani stations have been alleged to be running a diatribe against the incident and Kiran Naz is at the forefront of this movement. Naz, a well-known anchor is renowned for her verbosity, in one of her news clips on Pakistan's Samaa TV she lashed out at India and called Indian Prime Minister Narendra Modi a tea-seller PM.

She accused Modi of creating cross-border tensions because of upcoming elections adding, "Thank God for our prime minister Imran Khan unlike the tea-seller one from India is a visionary leader".

​Not being able to stomach this jab, Swara Bhaskar shot back on Twitter calling her a "sister" of a similar news anchor known for his blanketing verbosity, Arnab Goswami. She attacked Naz by saying that both sides (meaning India and Pakistan) have their share of "unhinged foaming at the mouth TV news anchors". Defending her prime minister she quipped, "What is your problem with chai-wallahs (tea-sellers)?"

The backdrop of the cat-fight was the recent suicide bomb attack against Indian security forces in Pulwama orchestrated by Pakistan-based jihadist outfit Jaish-e-Mohammed in which 40 paramilitary troops from India lost their lives, an incident that drew widespread condemnation including one from the United Nations Security Council.

India has accused Pakistan of playing an active role in the terror blast and withdrew the country's Most-Favoured-Nation (MFN) status increasing import duties on all Pakistani products to 200%. India is also working towards withholding its share of river waters that currently flow into Pakistan. Pakistan, on the other hand, has banned some terror outfits but India still maintains that Pakistan has done nothing against Jaish-e-Mohammed.