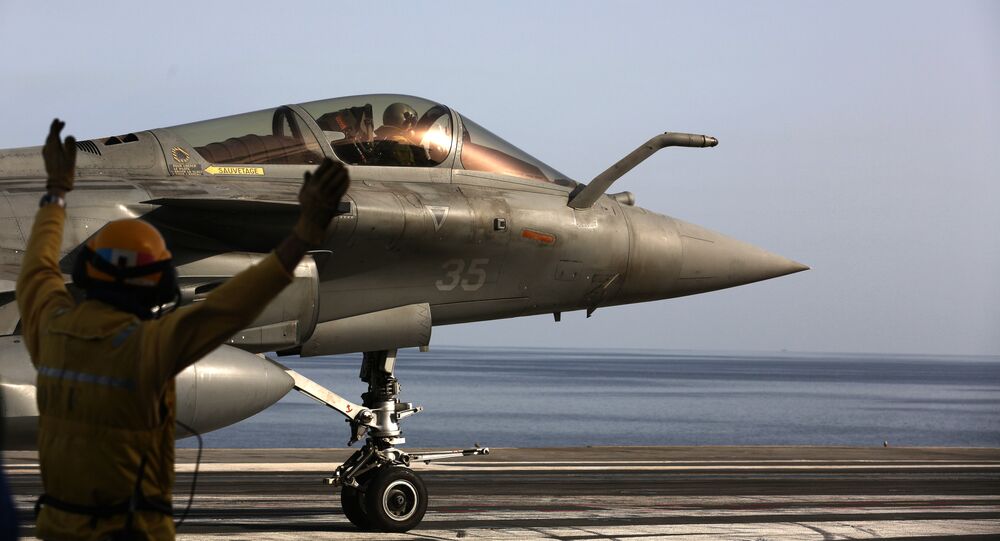 In December last year, the Supreme Court of India, while hearing a number of petitions alleging irregularities in the deal, virtually vindicated Narendra Modi government’s insistence that due process was followed in finalising the $8.7 billion deal with France.

In a major twist in the controversial deal pertaining to purchase of Rafale fighter jets for the Indian Air Force (IAF), India's apex court on Thursday agreed to bring forward the date for the review of its earlier judgement.

"We will do something for the listing of the case as a bench is to be constituted for it," the ANI news agency quoted Chief Justice of India Ranjan Gogoi as telling petitioner Prashant Bhushan in the Supreme Court, without giving a specific date for the hearing.

#SupremeCourt says it would consider listing of pleas seeking review of its verdict in #Rafale case. pic.twitter.com/GmoJSYRZVz

© AFP 2021 / Manjunath KIRAN
'No Amount of Spin Will Help': Rafale Deal Becoming Modi’s Nemesis as Opposition Steps Up Probe Demand
The review petition was filed after the country's apex auditor, the Comptroller and Auditor General of India (CAG), found that the Technical Evaluation Committee (TEC) had rejected Rafale for non-compliance of Air Staff Quality Requirements (ASQR) prescribed in the tender. The audit report noted deficiencies at all stages of the technical evaluation.

"M/s Dassault Aviation (DA) was allowed to bring about enhancements of 14 parameters which, ultimately was to cost over ‘XX' million €. Hence M/s DA was treated preferentially. The firm attributed these modifications to the unique requirements of the IAF and called them Indian Specific Enhancements (ISEs)," the audit report, which was tabled in the parliament on 13 December, reads.

"However, auditors noted that the Indian requirements, while they might not have been available in Rafale, were not unique because most of these features were available in the other five aircraft that were evaluated. For instance, Helmet Mounted Display 62 was available in all modern fighter aircraft including Eurofighter," it adds.

Indian Prime Minister Narendra Modi announced the deal in 2015, a year before the new defence procurement policy came into force.

The wait for many at @AeroIndiashow got over when, with a loud roar, the majestic #Rafale took to the skies; have a look👇

Not Withstanding the legal hearings, on Wednesday, Dassault Aviation once again denied any wrongdoing in the deal and said that the first fighter jet to be delivered to the IAF in next six months. "There is no scandal in the Rafale deal. We are going to deliver 36 aircraft. If the Government of India wants more aircraft, we will be pleased to deliver," Eric Trappier, Dassault Aviation CEO, told reporters in Bengaluru.