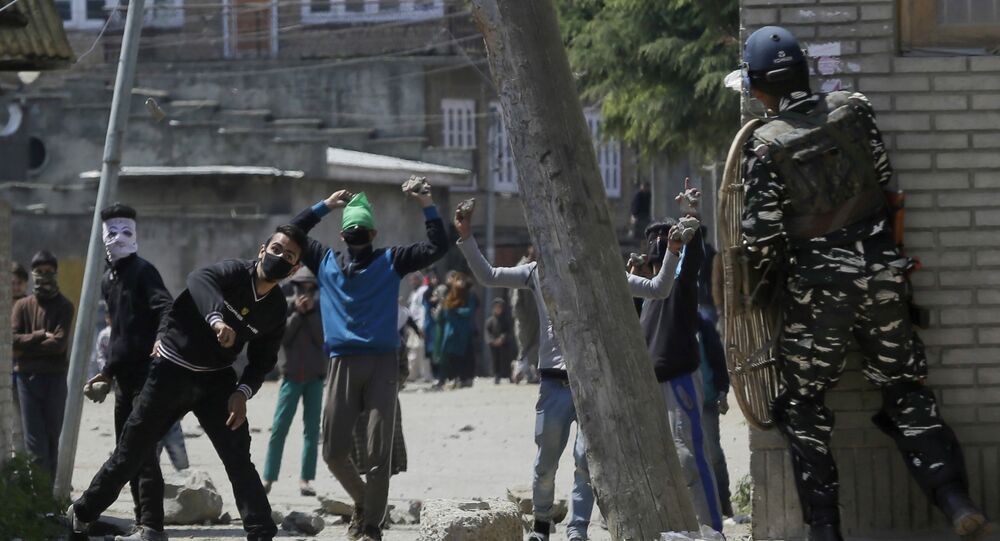 As tensions between India and Pakistan skyrocketed after a suicide car bombing in Kashmir, claiming the lives of more than 40 Indian security personnel, the New Delhi has been trying to isolate the Islamabad in the world stage, accusing the government of harbouring and assisting terrorist forces.

New Delhi (Sputnik) — Following the deadly suicide car bombing in Pulwama in Kashmir — a region split between Indian and Pakistani control — the two nuclear-armed neighbours are currently engaged in hectic diplomatic parleys with different power to sway opinions in their respective favour. On Tuesday, throwing its weight behind India, the New Zealand parliament passed a motion —  the first such in the world — condemning the terror attack.

"This house condemns the attack on Indian Central Reserve Police Force personnel in Pulwama on 14 February leading to a very large loss of life. We offer condolences to the people and the government of India and offer solidarity with the government of India in this difficult time as well as offer our deep sympathies to those grievously affected," Deputy Prime Minister Winston Peters said, addressing parliament.

US President Donald Trump termed the attack "horrible" while suggesting that the two countries should resolve the dispute amicably.

"I have watched. I have got a lot of reports on it. We will have comment (on it) at an appropriate time. It would be wonderful if they (India and Pakistan) get along," Donald Trump was quoted as saying by the PTI.

Meanwhile, amid speculation that France might table a proposal in the United Nations to proscribe Masood Azhar, head of Jaish-e-Mohammed (JeM), the terror outfit that claimed responsibility for the attack, Pakistani Foreign Secretary Tehmina Janjua met with French Ambassador Marc Barety to brief him on the human rights situation in disputed Kashmir. She also met with the German Ambassador Martin Kobler.

© AP Photo / Mahesh Kumar A.
India's Modi Vows Revenge for Kashmir Terror Attack Amid Pakistan Denying Role
The European Union's Sub Committee on Human Rights hosted an official exchange on Kashmir at the European Parliament in Brussels and highlighted the need for a peaceful resolution to the Kashmir issue through dialogue between Pakistan and India, and with the full participation of the Kashmiri people.

On Tuesday, in a televised announcement, Pakistani Prime Minister Imran Khan offered to investigate the JeM's involvement in the Pulwama attack "if India provides proof." However, the Indian side rejected the offer with a strong retort.

"This is a lame excuse. In the horrific attack in Mumbai on 26/11, proof was provided to Pakistan. Despite this, the case has not progressed for the last more than 10 years. Likewise, on the terror attack on Pathankot Airbase, there has been no progress. Promises of "guaranteed action" ring hollow given the track record of Pakistan," Raveesh Kumar, a spokesperson at India's Ministry of External Affairs said during a press briefing.

The situation in Kashmir has been simmering since India's independence from British colonial governance and simultaneous partition of the Indian mainland into the two countries of India and Pakistan in 1947. Several rebel outfits are operating in the region, allegedly with support from Pakistan.