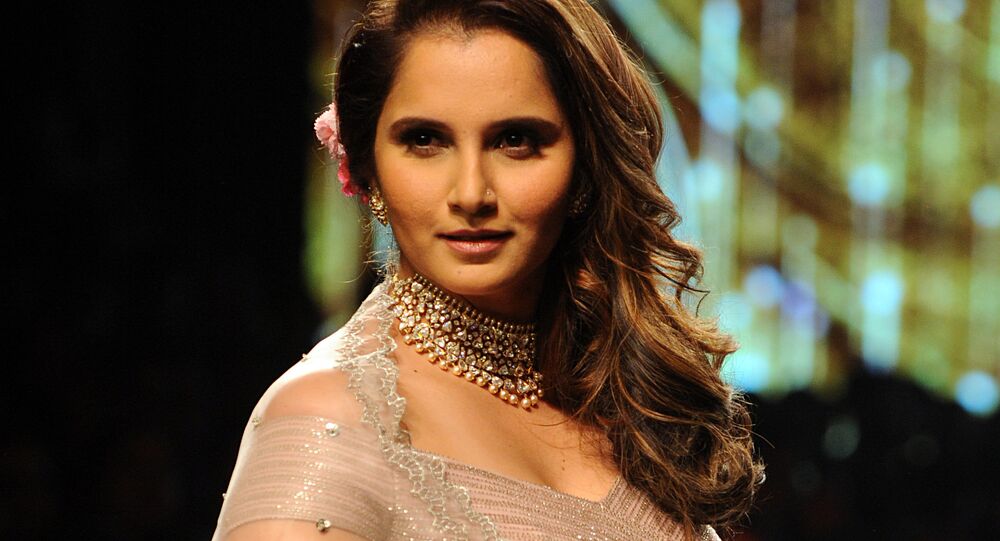 The demand comes in the wake of a jihadist attack in India which killed scores of security personnel - some believe it was carried out at Pakistan's behest. Indian Tennis sensation and serial Grand Slam champion Sania Mirza is married to Pakistani cricketer Shoaib Malik.

T Raja Singh, a lawmaker from the right-wing Bharatiya Janata Party (BJP), has demanded that Indian tennis star Sania Mirza be expelled as the brand ambassador of the Indian state of Telangana because she is the "daughter-in-law of Pakistan".

Raja Singh is the sole BJP legislator in the Telangana state government.

Meanwhile, Sania Mirza, an Indian ace tennis star married to a Pakistani Cricketer Shoaib Malik, has expressed her take on the terror attack that rocked the nation last week. She expressed sorrow and solidarity with the victims of  the Pulwama terror attack in the northern-most state of Jammu and Kashmir.

© AP Photo / Channi Anand
Protesters Throng Pakistan Embassy in Delhi Seeking Revenge for Pulwama Bombing
Despite this she was still criticised by some social media users. She then came out with an elaborate statement saying that she is not required to "condemn an attack" to prove that she is patriotic or cares about the country.

We, Pakistanis never ask Shoaib Malik to condemn Indian atrocities in Kashmir.
Why do you Indians keep crying for Sania to condemn the activities of freedom fighters?

She was also recently in the news for her open letter posted on Twitter in which she condemned those who think every celebrity should tweet to express their solidarity with the nation in times of crisis, insisting that patriotism is not necessarily expressed through social media.

Earlier, she described herself as "saddened" by the attack in Pulawama and offered her "sincere condolences" to the families of the victims.

Saddened at the attack on our CRPF soldiers in #Pulawama..my sincere condolences to the families.. there is no place for terrorism in the world.. prayers for peace.. #PulwamaAttack