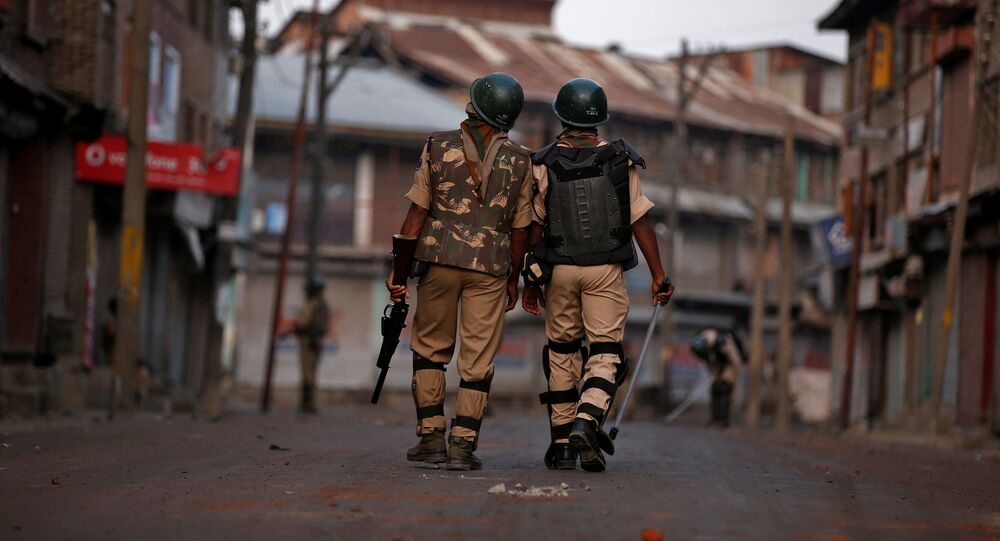 MOSCOW (Sputnik) - Russian President Vladimir Putin on Thursday sent his condolences to the Indian counterpart, Ram Nath Kovind, after a deadly bomb blast in the Indian-run part of the disputed Kashmir region.

"Please accept my heartfelt condolences on the death of Indian law enforcement personnel in a terrorist attack in the state of Jammu and Kashmir", Putin said in a message published on his website.

The president also expressed sympathies to Indian Prime Minister Narendra Modi, saying those behind this crime must be brought to justice, and called for closer anti-terror cooperation.

The bomb hit a paramilitary convoy earlier in the day, killing 40 officers of India's Central Reserve Police Force (CRPF). A Pakistani Islamist group, Jaish-e Mohammad, has claimed the responsibility for the attack.

The Pakistani Foreign Ministry said it rejected any attempts to link the recent deadly attack on a paramilitary police convoy in the Indian state of Jammu and Kashmir with the government of Pakistan.

"The attack in Pulwama in the Indian Occupied Jammu & Kashmir is a matter of grave concern. We have always condemned heightened acts of violence in the Valley. We strongly reject any insinuation by elements in the Indian government and media circles that seek to link the attack to the State of Pakistan without investigations", the ministry said in a statement.

Jaish-e-Mohammad is an extremist Islamist group, primarily operating on the territory of disputed Kashmir. The militant group is held responsible by Indian authorities for various attacks against the country. The Islamist extremist group, reportedly emerged in the early 2000s, claims its main aim is uniting the disputed Kashmir region with Pakistan and to expel foreign troops from Afghanistan.

In 2017, Indian security forces reportedly killed Umer Khalid, a leading commander of the Jaish-e-Mohammad group, during an operation in North Kashmir's Ladoora area. Khalid, a Pakistani national who was reportedly viewed as the most wanted militant, had operated in the area for the last two-three years, recruiting new members to the group.

Jammu and Kashmir is a region that has been disputed by India and Pakistan since 1947 when both countries gained independence from the British Empire. The two countries have gone through three wars over the region, but the conflict has not been resolved. The unstable situation in the region has led to the emergence of extremist militants.