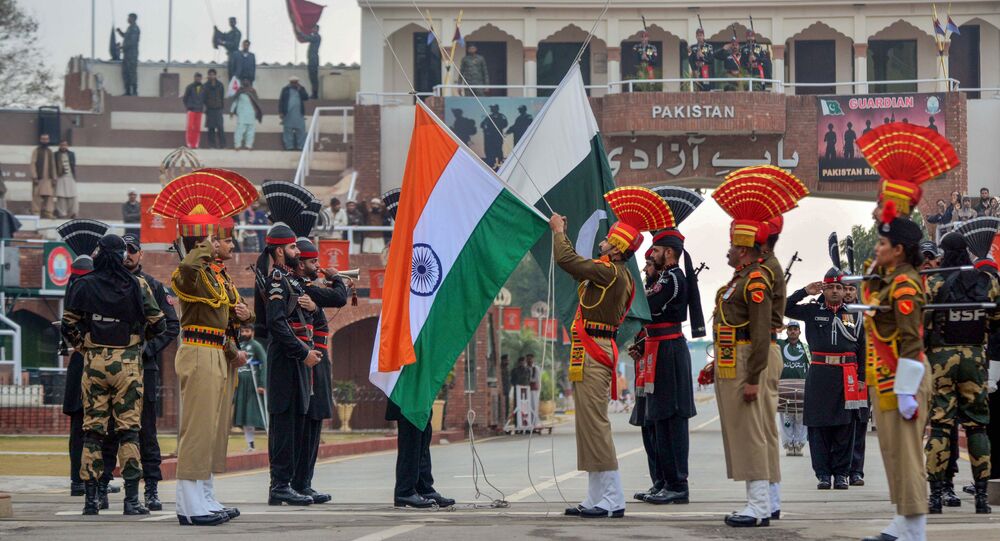 Despite frequent cross-border firing, bilateral trade between India and Pakistan has expanded under the Narendra Modi-led government, India's Commerce Ministry said on Wednesday.

"Although the prevailing political relations between India and Pakistan affect the policy framework of the bilateral trade, data indicates that India continues to enjoy a substantial trade surplus with Pakistan", CR Chaudhary, India's Minister of State for Commerce said in Parliament on Wednesday.

Earlier, India's Ministry of Commerce had confirmed that a diplomatic channel had been opened with Pakistan on trade issues.

"No bilateral trade meeting between India and Pakistan has taken place since May 2014. However, issues adversely affecting Indian exports have been taken up with Pakistan through diplomatic channel", CR Chaudhary, India's Minister of State for Commerce stated in Parliament.

© AP Photo / K.M. Chaudary
India Slams Pakistani PM Imran Khan for His ‘Pakistan Wants Peace’ Comment
India granted "Most Favoured Nation" (MFN) status to Pakistan in 1996. MFN is a treatment accorded to a trade partner to ensure non-discriminatory trade between two countries vis-a-vis other trade partners. The importance of MFN is indicated in the fact that it is the first clause in the General Agreement on Tariffs and Trade (GATT).

There has been a steep downturn in the political relationship between India and Pakistan following the terror attack on India's Uri military camp in 2016. India's Ministry of External Affairs has dug in its heels on not having any kind of dialogue with Pakistan "until and unless Pakistan stops terrorist activities in India".

On 31 January 2019, the relationship between the two neighbours took a further slide with the Indian foreign secretary summoning the Pakistani High Commissioner alleging that Pakistan was "brazenly attempting to subvert India's unity and to violate sovereignty and territorial integrity" as the Foreign Minister of Pakistan reportedly talked with separatist leaders of Kashmir over the phone.

According to the Indian Ministry of Home Affairs' data, the number of ceasefire violations by Pakistani forces has been increasing since 2016. A paper presented earlier this week in the parliament revealed that in the month of January this year alone there were 216 firings by the Pakistan military. In the whole of 2018, the number of instances when Pakistan provoked cross-border firing was 2,140. In 2017, there were 971 instances of cross border firings from the Pakistani side, the ministry said.

Since 2016, a total of 268 Indian security personnel and 155 civilians have lost their lives in Jammu and Kashmir, data compiled by the South Asian Terrorism Portal claims. The highest number of security personnel (95) was killed in 2018, according to the data.

The situation in Kashmir has been simmering since India's independence in 1947 from British colonial governance and simultaneous partition of the Indian mainland into the two countries of India and Pakistan. The accession of Kashmir to India is challenged by Pakistan. Several rebel outfits have been operating from Kashmir in the region, allegedly supported by Pakistan.