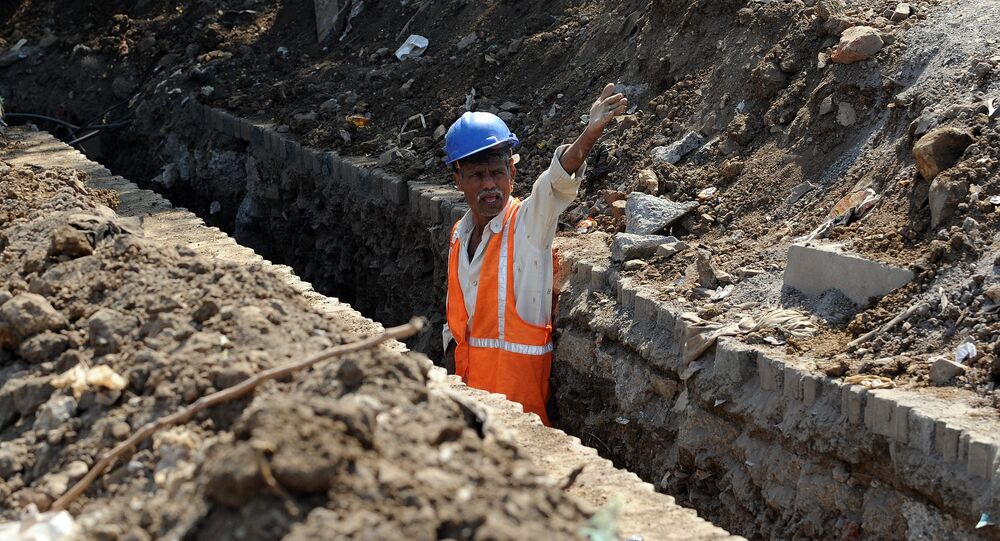 Locals in Nepal’s Kanchanpur fear that a trench being dug by India near the border could leave their villages vulnerable to flooding during monsoons. A Nepalese publication claimed that Indian border guards have ignored such concerns and resumed work on the site despite earlier agreeing to postpone the project for the time being.

Nepal has accused India of flouting an agreement on the construction of a trench in a no man's land near the village of Dokebazar in the Nepalese district of Kanchanpur. India's border guards force, the Shashastra Seema Bal (SSB), started digging the trench on 23 January, prompting a series of protests by Nepalese locals.

Nepalese authorities then took up the matter with Indian officials during a high-level meeting in which they agreed to temporarily halt the digging, according to The Republica newspaper.

However, the publication claimed that the SSB resumed work on the trench before the next meeting.

"We had agreed to postpone the work until the next meeting of officials of both the countries… We were waiting for them to call a meeting but they went against the agreement and resumed the work of digging the trench," Kanchanpur Chief District Officer (CDO) Shankar Bista said, as quoted by The Republica.

© AP Photo / Altaf Qadri
Nepal Imposes e-Payment Limit for Citizens in India
India claims the trench has been elevated to stop the movement of animals from the Dudhwa National Part, while the Nepalese side considers this a threat during monsoons.

"This wall will block the flow of water. Hence, it will lead to inundation in Nepal," Bikash Ghodasaini, a concerned local, said.

Nepal and India continue to spar over a swathe of land near Nepal's Kanchanpur District; despite border surveys, talks on settling the dispute have so far proven futile.

READ MORE: ‘Rocky Times Ahead’: At Least 33% of Himalayan Glaciers on Pace to Melt by 2100

During Indian External Affairs Minister Sushma Swaraj's visit to Nepal in 2014, the two sides agreed to form a Boundary Working Group (BWG) to settle the border dispute by 2019. The deadline was later extended by three years to 2022.

Nepal and India share a 1,880km-long border, which is porous but demarcated by 8554 pillars. The most recent joint survey indicated that 3,281 of the 8,554 pillars were missing, compounding the border issue.

Nepal Appoints Ambassador to India After One Year Hiatus