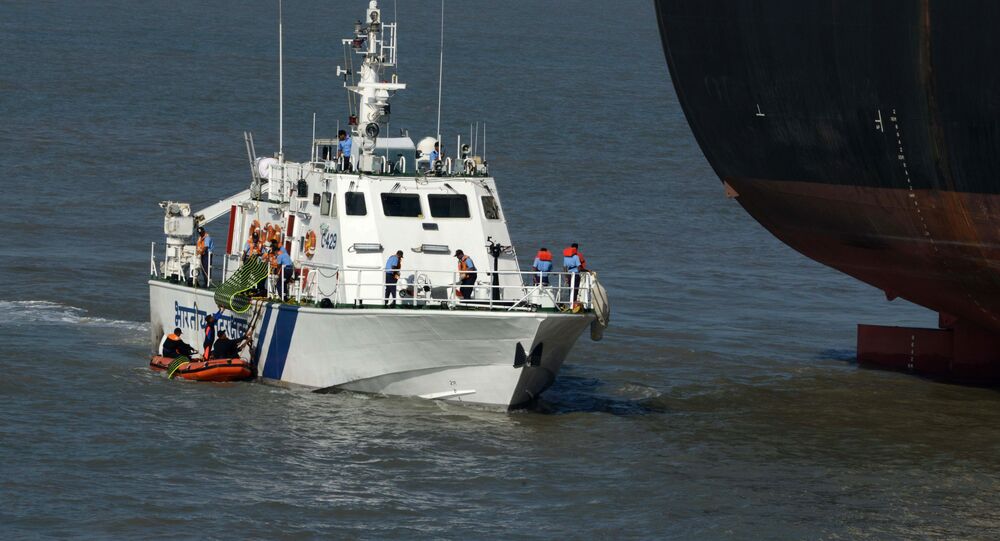 Illegal hunting of sharks is rampant along the eastern sea of India especially in the coastal belt along the state of Odisha. Shark fins are brought to Chennai in southern India from where they are smuggled into South East Asia.

New Delhi (Sputnik) — The Indian Coast Guard has busted a shark hunting racket in Odisha and recovered in excess of 250 carcasses aboard a fishing trawler that formed part of an illegal hunting expedition, the local newspaper Orissa Post reported.

"On January 21, while on coastal patrol, Indian Coast Guard Ship C-426 apprehended trawler IFB Narasimhulu, between Gahirmatha Bio Reserve and Paradip. During the search, the boarding team found carcasses of protected species of sharks in the vessel storages", said the Indian Coast Guard in a press release on Wednesday.

Screenshot/San Antonio Aquarium
WATCH: Thieves Snatch Small Shark From US Aquarium, Smuggle It Out Disguised as Baby
The apprehended fishing trawler had protected species like hammerhead sharks, bull sharks, spot-tail sharks among others. The crew members of the trawler along with the catch have been handed over to the forest department for further investigation, informed the Coast Guard.

The forest department in conjunction with Indian Coast Guard carries out awareness campaigns among fishermen against the hunting of protected species including sharks.

Biswajit Mohanty who was formerly a member of the National Board of Wildlife has expressed surprise at the recovery of shark carcasses. "Normally fishermen cut off shark fins and put sharks back into the water. They do not use shark meat", he said according to the media report.

"Hunting of sharks is rampant along Odisha coasts. Shark fins are bought by traders who ship these to Chennai in southern India from where they are distributed into South East Asian nations", Mohanty added.

In the Nick of Time: Coast Guard Saves Surfer Stranded for Over 30 Hours at Sea