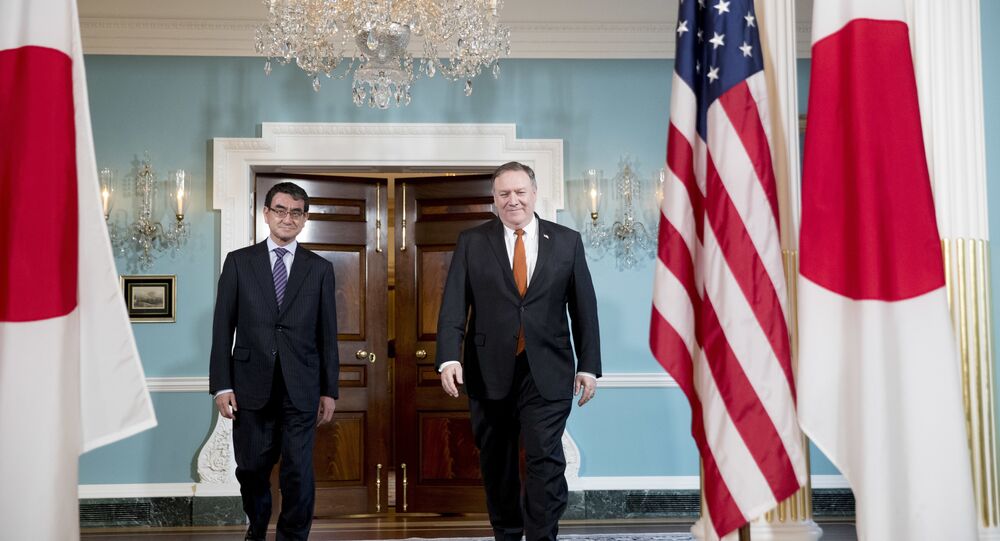 Japanese FM, US Secretary of State to Meet Ahead of Trump-Kim Summit - Statement

TOKYO (Sputnik) - White House spokeswoman Sarah Sanders has announced that US President Donald Trump would hold his second summit with North Korean leader Kim Jong-un at the end of February and a venue would be announced later. On Friday, Trump discussed with North Korean Vice Chairman Kim Yong-chol in Washington details of the upcoming summit.

"Both ministers agreed to coordinate a proposal to hold talks between the foreign ministers of Japan and the United States in mid-February, if circumstances allow", the ministry said in a statement.

It also reported that Kono and Pompeo had confirmed their readiness to cooperate for the fast resolution of the problem of the Japanese citizens abducted in the past by North Korean intelligence services.

© AP Photo / Pyongyang Press Corps Pool
With Nukes Built, North Korea Shifts Focus to Economic Development
Tokyo is closely following Washington-Pyongyang negotiations, waiting for the possibility of discussing the fate of the abducted Japanese with the North Korean side. For its part, North Korea believes that the problem was resolved when, in 2002, it expressed regret to Japan about the abductions and allowed five forcibly abducted Japanese to return to their homeland.

According to Tokyo, 17 Japanese nationals were abducted by North Korean security agents and its associates in the 1970s and 1980s, and about 900 more disappeared under circumstances that could potentially involve North Korea's actions. Pyongyang recognized 13 instances of kidnapping Japanese citizens, five of whom were returned to Japan and the remaining eight died. It is believed that some of these Japanese citizens were abducted for the purpose of obtaining their identities, which were then used by North Korean penetration agents in South Korea. Other victims allegedly taught the Japanese language to North Korean intelligence personnel.

© REUTERS / Mandatory credit Kyodo
Japan Arrests North Korean Vessel Crew Suspected of Theft Amid Inflow of 'Ghost Ships' - Reports
Pyongyang has been subject to numerous UN sanctions over the past 10 years for its nuclear and ballistic missile tests. The sanctions target North Korea's exports of natural resources, such as coal, imports of weapons, oil, petroleum products and any financial and material support that could contribute to the development of the country's missile or nuclear programs. Tokyo has repeatedly said that it witnessed suspicious ship-to-ship transfers of goods to North Korea that may be coming in violation of the UN sanctions.

However, the tensed situation on the Korean Peninsula has improved since the beginning of last year. During this time, North Korean leader and South Korean President Moon Jae-in have held several meetings, while Kim even had a historic June summit with Trump in Singapore. This summit yielded an agreement stipulating that North Korea would make efforts to promote the complete denuclearization of the peninsula in exchange for the United States and South Korea freezing their military drills as well as the potential removal of US sanctions.