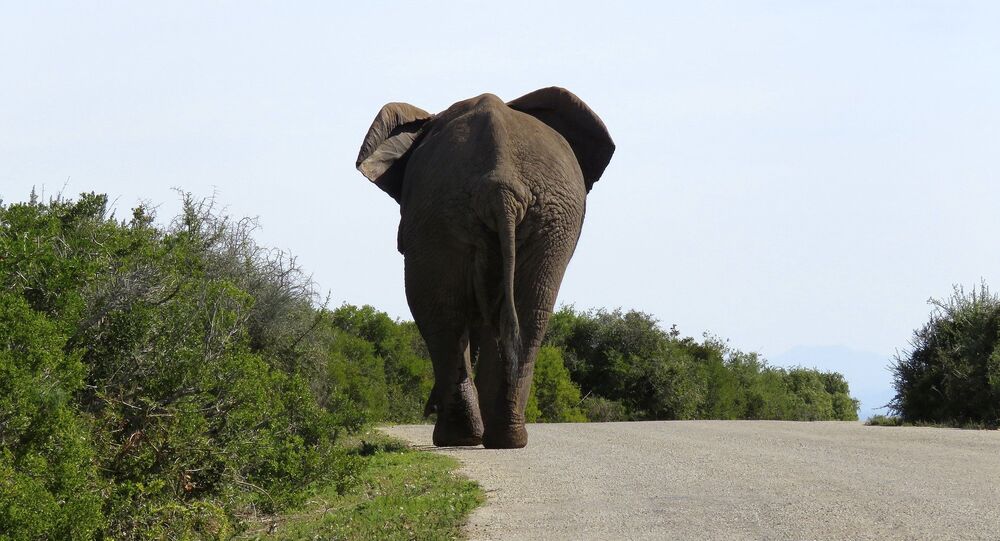 People in this region of the eastern Indian state of West Bengal have been witnessing an increased number of attacks on humans by wandering elephants. They have also faced significant damages to their crops, which has impacted people’s livelihoods.

New Delhi (Sputnik): Angry villagers from the Bishunpur in West Bengal hurled crude homemade bombs at an elephant and her calf to shoo them away from their crops in a case of increasing human-wildlife conflict.

A photograph captured by Biplab Hazra, a Bishunpur-based photographer, shows that villagers of the remote area had hurled firebombs after the elephant duo had damaged their crops. Hazra is an award-winning photographer and was awarded the Sanctuary Wildlife Photography Award 2018 Certificate.

West Bengal has been witnessing a rising number of elephant-human conflicts due to deforestation that has reduced the natural habitat of elephants. Hazra has captured this trend through his photography.

In 2017, Biplab Hazra won the Sanctuary Wildlife Photography Award 2017 Certificate for a photograph showing an elephant and her calf trying to escape tar bombs hurled by villagers in the same region.

"Some years ago we were forced to leave our villages because elephants used to attack our houses and agriculture land on daily basis. We had to stop growing ginger and other crops. Now three of our brothers have shifted to the nearby town of Siliguri. However, my father is still living in the village. He lives thus because he is not dependent on farming for survival", Suman Kalyan Pradhan, a resident of the area told Sputnik.

Data presented by India's Ministry of Environment in the Parliament last December shows that since 2015, some 107 elephants have lost their lives in accidents while crossing railway tracks. As many as 2,330 elephants in India have died due to unnatural causes in the last five years.

Is It Ethical to Mix Man and Animal?