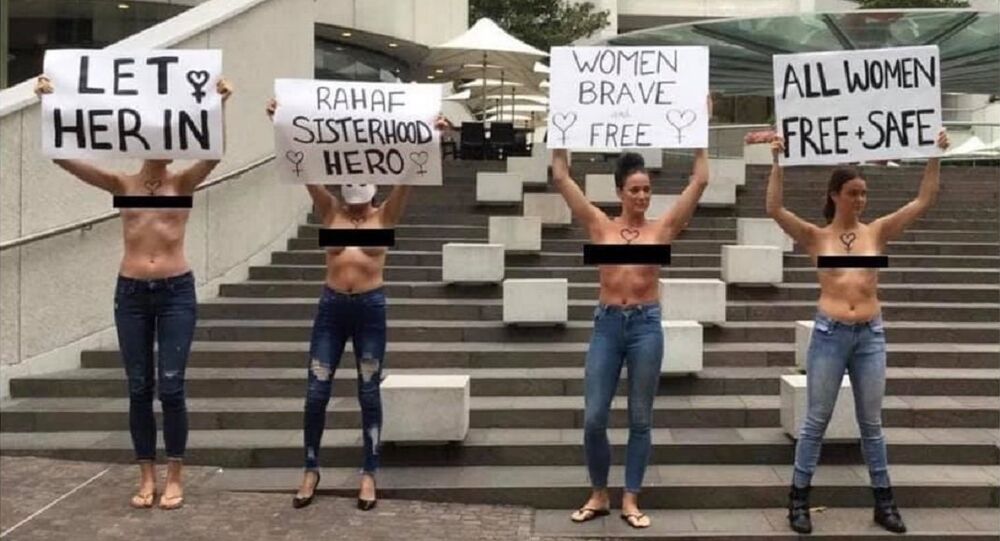 The founder of the group which staged the protest called on the Australian government to support Rahaf Mohammed Alqunun’s, insisting that the girl should be “an icon for the rest of the world that women shouldn't be oppressed”.

A group of four women who allegedly belong to a group called the Secret Sisterhood held a topless protest in Sydney, seeking to raise awareness about the plight of Rahaf Mohammed Alqunun, an 18-year old Saudi woman, 9News reports.

The topless ladies, dressed only in jeans, holding placards with messages including "Let her in" and ''Rahaf Sisterhood Hero", picketed the Saudi Consulate, urging Australian authorities to grant Alqunun residency.

"We are here to encourage them to let her in. She's been recognided by the UN as a refugee so we believe the Australian government needs to step up, recognise her plight and recognise what she's gone through, and she could be an icon for the rest of the world that women shouldn't be oppressed and they should be fleeing countries that they are oppressed in," Sisterhood’s founder Jacquie Love said.

Rahaf Mohammed Alqunun ended up trapped in Bangkok, where she arrived as an in-transit passenger bound for Australia, after she attempted to flee from her home country; she landed in this predicament after the local Saudi Arabia embassy staffers confiscated her passport following a tip-off from her father.

Alqunun’s situation came to light and attracted the attention of human rights activists after she made an appeal via social media, claiming that she would be either be killed by her family members or jailed if she were to be returned to Saudi Arabia.

Earlier, the United Nations High Commissioner for Refugees referred Alqunun’s case to Australian authorities, with the Australian Department of Home Affairs saying that it would "consider this referral in the usual way, as it does with all UNHCR referrals."