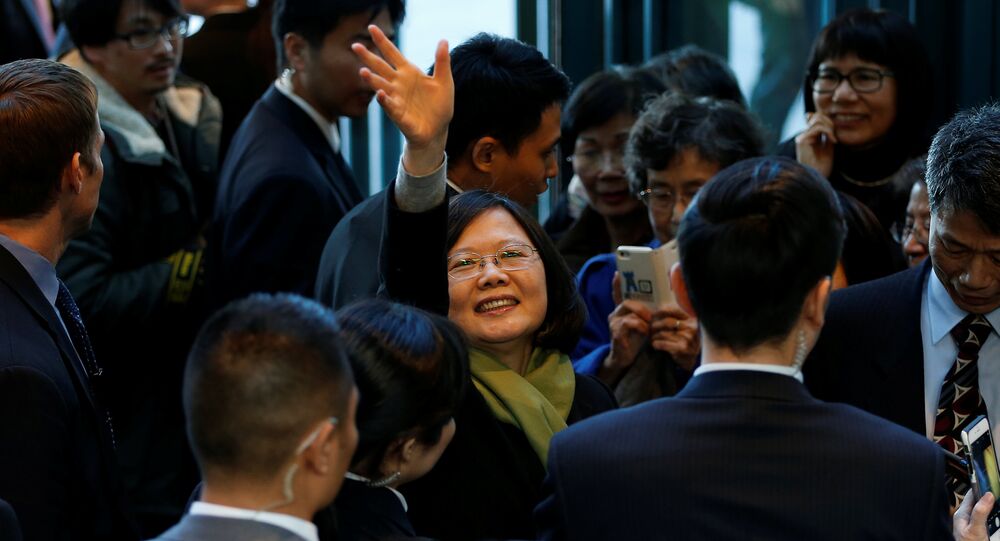 In response to Chinese President Xi Jinping’s speech earlier on Wednesday, in which he reiterated that China would “make no promise to renounce the use of force” in eventually unifying both sides of the Taiwan Strait, Taiwanese President Tsai Ing-Wen has herself dug in, saying Taiwan “will never accept the concept of ‘one country, two systems.’”

Tsai spoke at Taiwan's Presidential Office in Taipei Wednesday, after Xi spoke in Beijing's Great Hall of the People to commemorate the 40th anniversary of "Message to Compatriots in Taiwan," a policy document issued on the day the US and China established formal diplomatic relations that proposed dialogue and exchanges between the two countries, not military confrontation. Washington and Beijing established ties only after the US broke its formal ties to Taiwan. To this day, the US has no official embassy in Taipei, and the unofficial American Institute in Taiwan performs consular services.

Though Xi insisted that "it's a legal fact that both sides of the Strait belong to one China, and cannot be changed by anyone or any force," his speech was to some degree conciliatory, calling for discussion and increased economic cooperation.

Tsai, however, was not moved. "The majority of Taiwanese are staunchly opposed to the concept [of one country, two systems]. That is the ‘consensus of Taiwan,'" she said, the Taipei Times reports.

Much friction stems from the idea of "consensus" in Taiwan-China affairs — Tsai's government has bucked a trend of decades by refusing to ratify what is called the "1992 Consensus," an agreement between China and Taiwan's Chinese Nationalist Party (KMT) that there is indeed "one China" that spans the Taiwan Strait, though both sides may have their own ideas of how it should be governed. Tsai is a member of the Democratic Progressive Party.

Tsai also slammed Xi for inviting political parties and other groups and individuals in Taiwan to discuss cross-strait issues, saying that negotiations between China and Taiwan must be done government to government, as between two equal states. China must recognize the existence of the Republic of China (Taiwan's formal name) and negotiate with its government, and respect the democracy its people have created, she said.