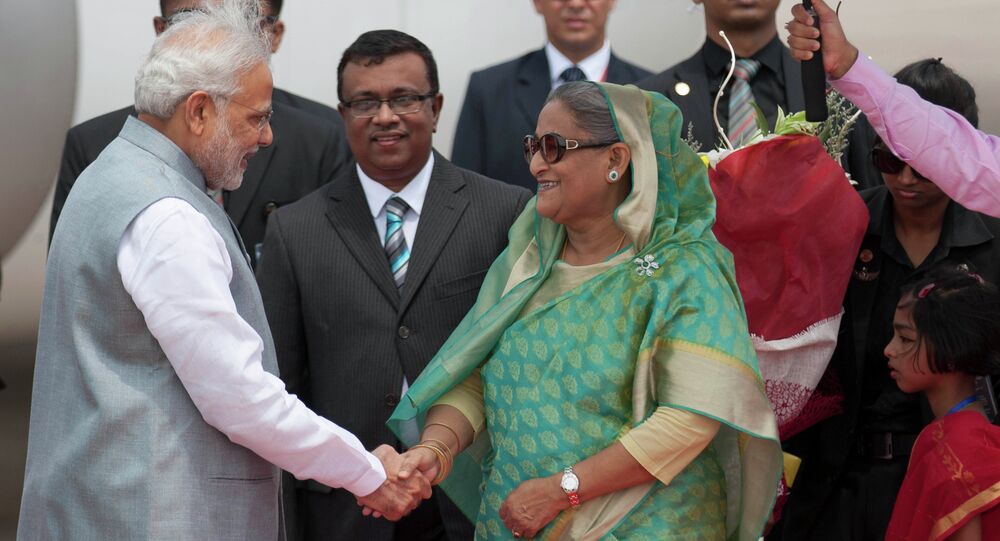 Describing Sheikh Hasina’s leadership as “far-sighted”, Indian Prime Minister Narendra Modi has said that India will continue according priority to Bangladesh in its "Neighbourhood First" policy.

"He expressed confidence that the partnership between India and Bangladesh will continue to flourish under her far-sighted leadership. PM also reiterated the priority India attaches to Bangladesh as a neighbour, a close partner for regional development, security and cooperation, and a central pillar in India's ‘Neighbourhood First' policy", a statement issued by India's ministry of external affairs read.

© AP Photo / A.M. Ahad
Indian Observers to Keep an Eye Out on Bangladesh Elections
For her part, Bangladeshi Prime Minister Sheikh Hasina thanked the Indian Prime Minister for being the first leader to call her to convey congratulations.

"She also thanked India for its consistent and generous support which has benefited Bangladesh's development, and appreciated PM's reiteration of this commitment", the statement added.

Sheikh Hasina was elected the PM for the third time after her party, Awami League registered a landslide victory by winning more than 267 seats in the 300-member Parliament, according to the Election Commission of Bangladesh.

The opposition alliance led by the Bangladesh Nationalist Party managed to secure only seven seats.