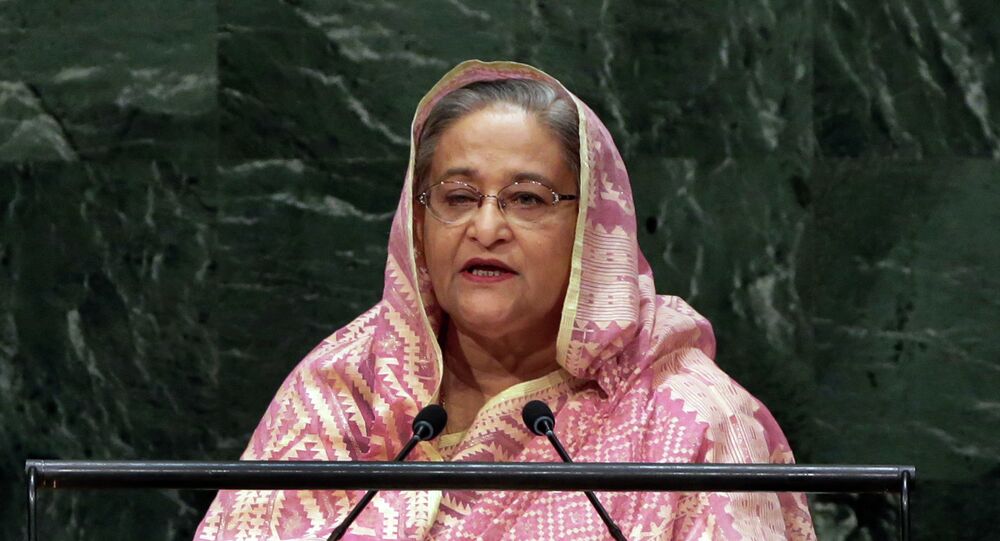 The alliance dominated by Hasina's Awami League won 287 of the 298 seats for which results have been declared in the 300-member legislature, according to the commission cited by the local TV channel, NTV.

© AP Photo / A.M. Ahad
Indian Observers to Keep an Eye Out on Bangladesh Elections
The two main opposition parties, the conservative Jatiya Party and the right-wing BNP, are reported to have won respectively 20 and six mandates.

A total of 47 politicians announced withdrawal of their candidacies from the general election, including at least 42 politicians from the opposition Jatiya Oikya Front (National Unity Front), the Daily Star newspaper reported.

© REUTERS / Mohammad Ponir Hossain
Bangladesh Lodges Protest With Myanmar Over Racist Remark About Rohingya Refugees
According to the news outlet, in many regions of the country journalists were prevented from entering polling stations, while various obstacles to the work of observers were created in the country's 221 districts. In addition, some polling stations even closed for a so-called lunch break, during which nobody was allowed in.

Kamal Hossain, the leader of the Jatiya Oikya Front alliance, in turn, said that the Bangladeshi opposition did not recognize the election's results and requested the holding of another election.

"We have gotten similar reports of voter fraud from almost all centres… We reject the results and demand a new election under a neutral government," Hossain said as quoted by Bangladesh's Bdnews24 news portal.

© Sputnik / Shahnewaz Khan
China Ready to Help Bangladesh in Rohingya Repatriation – Foreign Minister
The country's ruling Awami League, for its part, dismissed the criticism, saying that the vote was fair and impartial, the news portal added.

At least 17 people were killed and over 60 others were injured in clashes during the parliamentary election in the country on Sunday. The clashes between representatives of various political forces were recorded in the Bangladeshi cities of Chittagong, Comilla, Dinajpur, Rajshahi and Rangamati. As many as nine people have been detained in connection with clashes.

The definitive results are expected to be made public on Monday.