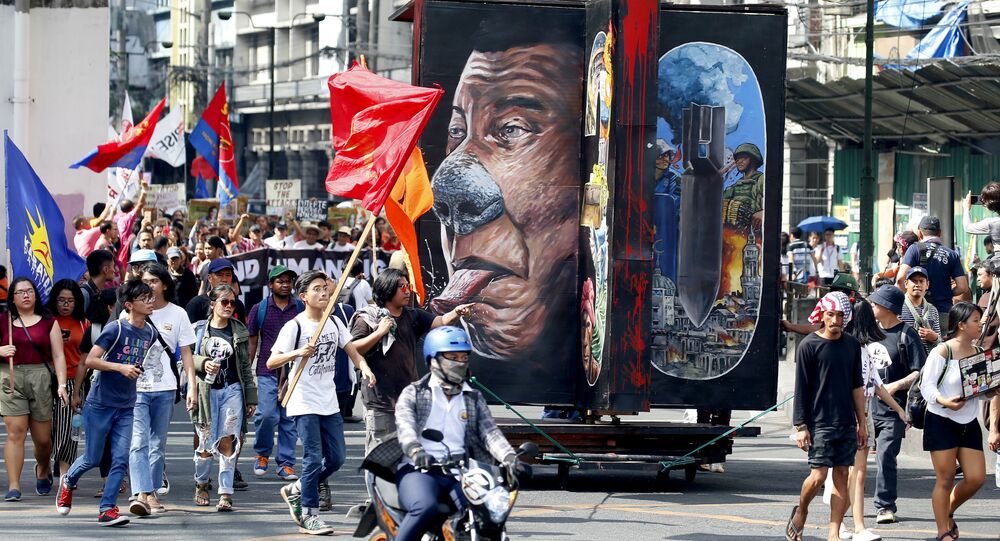 Philippine President Rodrigo Duterte, fond of recounting all manner of unseemly and occasionally horrific behavior, has topped himself with an admission that he molested a maid in the service of his family while he was a teen, according to multiple reports.

In claiming that he illegally fondled a family maid as she lay sleeping under a blanket, the Asian leader recounted the confession that he offered a Catholic priest while still a high-schooler.

A man who is on record joking about rape and boasting of his adulteries, Duterte, speaking on Sunday, detailed a confession he made as high-schooler to a priest, explaining that, upon entering a room in which a family maid slept, he touched her body without her consent, according to the South China Morning Post (SCMP).

"I lifted the blanket,' the Manila strongman carefully noted in his remarks, adding, "I tried to touch what was inside the panty."

"I was touching," Duterte recounted to a shocked and now-silent room. "She woke up," he continued, "so I left the room," cited by SCMP.

The leader of the Asian nation with the highest population of Christians then described how he returned to the maid's room at a later time and attempted again to molest her. He did not reveal whether his illegal and behaviorally-questionable actions were consummated.

His admission quickly drew nationwide scorn and approbation, as well as calls for him to resign.

Women and women's rights political groups immediately denounced Duterte's ‘repulsive' comments, as many pointed out that his actions constituted attempted rape. Others observed that his offhand remarks could be taken as encouraging sexual abuse.

"Rape does not happen only through penile insertion. If it is a finger or an object it is considered rape," stated Joms Salvador, secretary general of the Gabriela opposition political party, cited by SCMP.

Many noted that Duterte's admission of engaging in sexual molestation endangers the over one million Filipino domestic workers who work abroad.

"Flaunting abusive practices encourages the rape culture and in this case, sexual abuse of domestic workers," said Coalition Against Trafficking in Women-Asia Pacific executive director Jean Enriquez in a statement, cited by the Manila Standard.