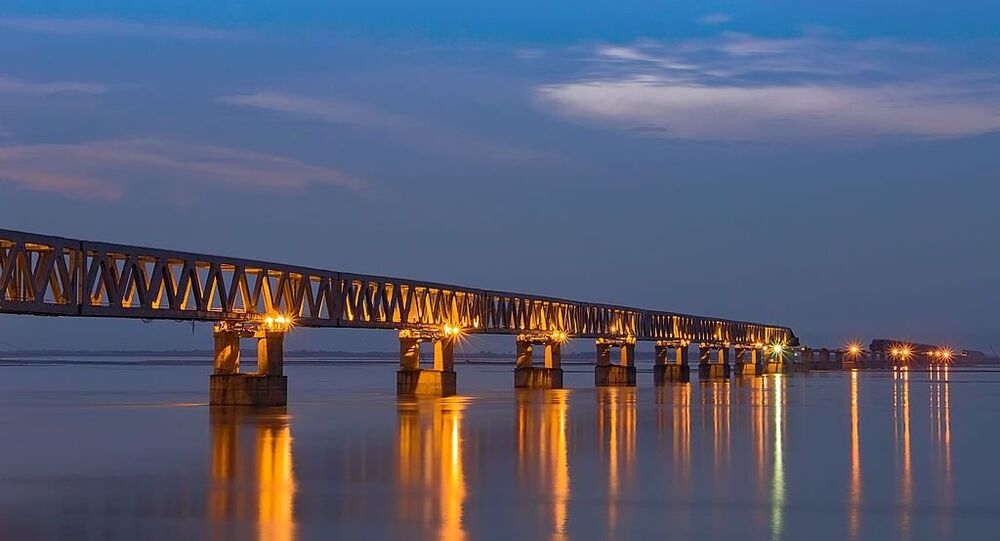 The newly constructed Bogibeel bridge, which runs over the Brahmaputra River, is India’s longest railroad bridge; it is designed to bear the weight of battle tanks and accommodate the landing of fighter jets.

New Delhi (Sputnik) — Indian Prime Minister Narendra Modi inaugurated India's longest railroad bridge, located in in northeast India, near the country's border with China, as the government looks to boost its defences in the strategic area.

In addition to being India's longest bridge, the new construction can bear the weight of India's heaviest battle tanks. Furthermore, it will also allow Indian Air Force (IAF) warplanes, including Russian-made Sukhois, to take off and land.

© CC0
India Begins Tunnel Work Through Himalayas to China Border
The 4.9km-long bridge, situated over the Brahmaputra river in the Indian state of Assam, took around two decades to complete, costing $800 million.

The bridge will considerably reduce the journey time from Dibrugarh to Arunachal Pradesh's capital, Itanagar, near the border with China.

The bridge is of strategic importance as it will provide connectivity and aid the movement of Indian Army forces to Arunachal Pradesh, should such a swift deployment be deemed necessary.

In fact, the Bogibeel bridge, which connects the northeastern states of Assam and Arunachal Pradesh, is a part of India's strategy to boost the region's infrastructure. Some of northeastern India is disputed, with Beijing claiming the territory belongs to China.

Although the foundation of the bridge was laid in January 1997 construction work only began in 2002. The bridge will have a serviceable life of around 120 years, according to estimates.