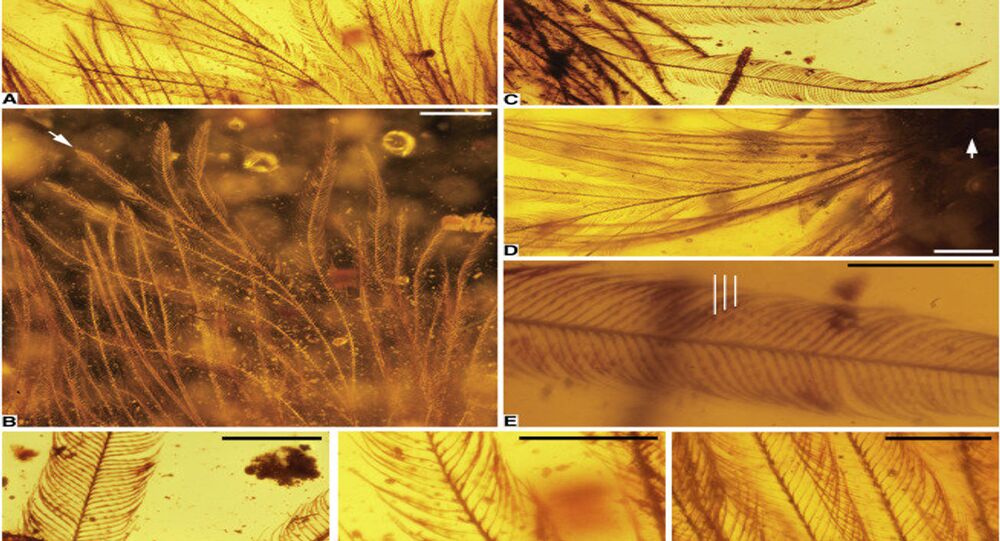 Chinese scientists have discovered strange-shaped tail feathers in 100 million-year-old ambers which do not belong to any existing or known birds, and they believe that the streamer-like feathers could have a social function.

A cross-section of the central shaft of the tail feathers is shaped like the letter C, while all existing birds possess feathers with hollow tubes at the center in the shape of the letter O. The C-shaped streamers were not as good for flying as O-shaped ones.

© Sputnik / V. Baranovskiy
German Treasure Hunters Reportedly Claim to Know Whereabouts of Russia's Missing Amber Room
They were also very thin, less than the size of the average cell, and therefore less sturdy. They were lighter than O-shape feathers and energy-efficient to produce, according to Xing Lida, head of the research team and associate professor at the China University of Geosciences.

Some of the feathers had dark brown strips and colorless strips appear alternately.

Since no scratches were found on the feathers and none of the bird's body parts were discovered near the feathers, scientists believe the light and colorful feathers easily fell when the bird faced predators, Xing told the Global Times on Sunday.

© Photo : Royal Saskatchewan Museum/R.C. McKellar
Scientists Find First Feathered Dinosaur Tail Preserved in Amber
These once colorful feathers may have had a similar use. The report said the feathers could have belonged to birds transitioning from dinosaurs as they were preserved in ambers formed in today's North Myanmar about 100 million years ago.

Most of the previously discovered tail streamers were flattened by stones, making the feathers nearly impossible to study. "This discovery pointed out a new direction for us to explore evolution of ancient birds. Scientists used to take the modern O-shape streamers for granted when examining flattened feathers," Xing said.

The 31 examined ambers contain feathers as long as 5 centimeters, suggesting the birds would be at least 10 centimeters long.