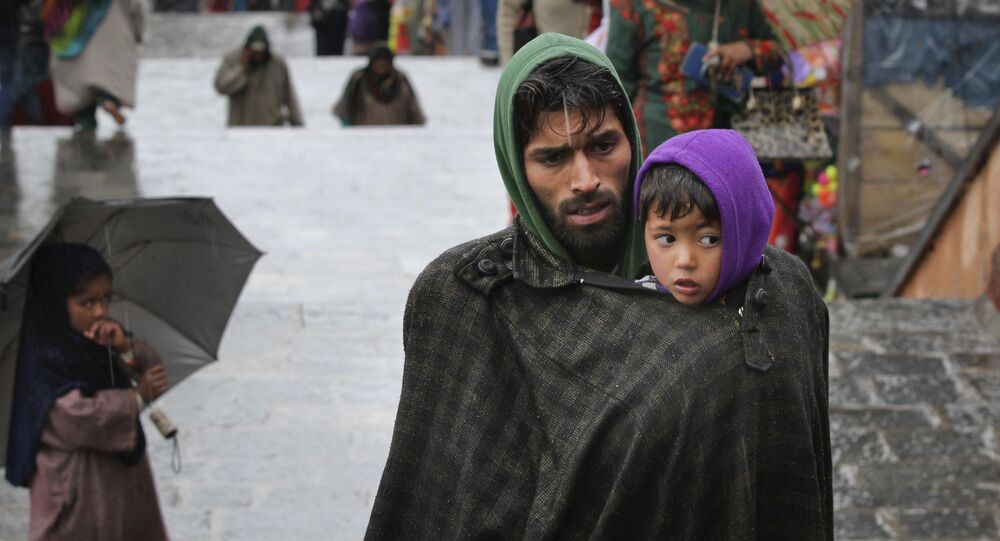 The pheran is a type of cloak believed to have been brought into Kashmir around 700 years ago from Central Asia where it had the Persian name 'pairahan'.

A major controversy has erupted in Kashmir following a government order banning the use of the pheran, a key part ofKashmiri attire in some parts of the state. The decision was taken in the light of a rising number of terrorist incidents in the state and attacks on the security forces by crowds using stones.

Last week seven civilians were killed in crossfire between besieged terrorists and the Indian Army where the locals had attempted to stop security personnel from taking action against the insurgents.

A stream of protest erupted on social media criticising Delhi's decision to ban the ethnic Kashmiri wear in government offices.

My father & I have worn pherans to official functions many times over the years & will continue to do so, silly government orders not withstanding. #dontbanourpheran #revokepheranban. pic.twitter.com/nEsjpMd4XB

"I fail to understand why pherans should be banned! This is a regressive order that makes no sense at all. Pherans are a very practical way of keeping warm during the cold winter aside from being part of our identity. This order should be withdrawn," Omar Abdullah, former chief minister of Jammu and Kashmir said while expressing strong displeasure over the order.

I fail to understand why pherans should be banned! This is a regressive order that makes no sense at all. Pherans are a very practical way of keeping warm during the cold winter aside from being part of our identity. This order should be withdrawn. https://t.co/ClmV5b9smV

#Pheran is my identity & its part of my culture and I am proud of it.I won’t allow non residents to ban our cultural dresses like pheran in our motherland #revokepheranban #ProudOfMyCulture #kashmir @OmarAbdullah @narendramodi pic.twitter.com/6gESzmLNy3

​​I love wearing #Pheran and will continue to do so wherever I go. Its part of my culture and I am proud of it #revokepheranban #Kashmir pic.twitter.com/mO1gT6RS8h

"All the officials visiting this office are advised to visit with proper dress code during official visits. It is recommended that no official will visit this office wearing 'pheran', traditional trousers and sleeper/plastic shoes," the government order read.

The order is meant to be imposed in educational institutions and the state secretariat in Jammu and Kashmir. Earlier, the Ministry of Human Resource Development (MHRD) had removed the word Kashmiri from the online portal ‘BashaSangam' following a complaint by some Kashmiri Pandits.

Pheran is our cultural identity, what is wrong with it if we wear it during harsh cold winter season? Earlier, Kashmiri language was removed from HRD ministry then now announcements in kashmiri language at Sgr Airport also stopped. Why??@jandkgovernor @spmalik_13 @JKgrievance

How did the Zonal Education Officer, Langate place pheran and plastic shoes in the same category? Who thinks a pheran can't be official and professional? Why is only western dress considered professional? #offensive #respect #kashur #dontbanourpheran #revokepheranban

11 Relatives of Jammu and Kashmir Police Abducted by Terrorists