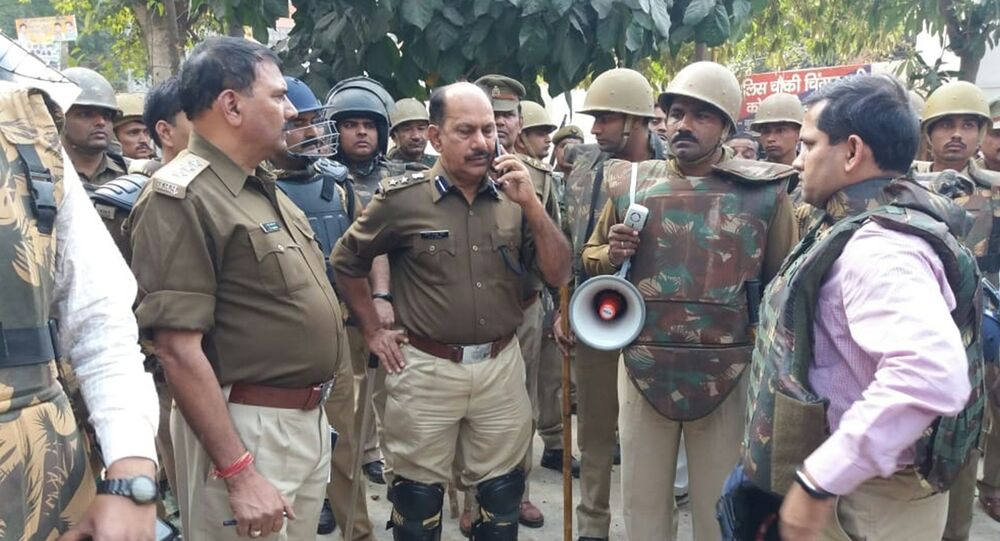 As the incident of two persons being killed in mob violence triggered by the discovery of slaughtered cows unfolded on December 3, just ahead of the anniversary of a communally sensitive event in India’s Uttar Pradesh, the state government says it senses a conspiracy angle behind the entire episode.

After a police officer and a local youth were killed in mob violence led by cow vigilantes in the Indian city of Bulandshahr, the state government is now investigating "the conspiracy angle" behind the cow meat that triggered the agitation by right-wing youth activists. UP Chief Minister Yogi Adityanath on Tuesday night ordered a thorough probe of the incident.

Inspector Subodh Kumar Singh from the Uttar Pradesh police and 20-year-old Sumit Kumar were killed when a mob of some 400 people went on a rampage in Bulandshahr after they recovered a cow's carcass in a nearby jungle.

© REUTERS / Danish Ismail
Indian Cop Beaten to Death by Mob Protesting Cow Slaughter [GRAPHIC VIDEO 18+]
The Uttar Pradesh police told the media that they sense a "conspiracy" behind the mob violence and are investigating why the dead cows were found on 3 December, just ahead of the anniversary of the demolition of the communally sensitive Babri Masjid structure in nearby Ayodhya on 6 December.

"We are not only seeing it as a law and order issue. It was a conspiracy and we are probing why the particular day December 3 and place on which the cows were slaughtered and their remains spread in the field were selected", Director General of Police OP Singh told news agency PTI.

UP DGP O P Singh: The incident in #Bulandshahr is a big conspiracy. This is not only a law and order issue, how did the cattle carcass reach there? Who brought it, why & under what circumstances? pic.twitter.com/Zs2YQZw4br

FIR in the Bulandshahr violence names Yogesh Raj, Bajrang Dal District convenor and 27 others as the main conspirators. Booked under section 302 and several other stringent sections of IPC.

People have taken to social media to express their scepticism over the Uttar Pradesh government's stress on investigating the appearance of a cow carcass while the people responsible for the killings are roaming scot-free.

Human rights body Amnesty India has criticised the government's laxity in investigating the cause of the violence and deaths.

Meanwhile, the police officer's association of the state have condemned the killing of their colleague and have sought a thorough probe to book the perpetrators.