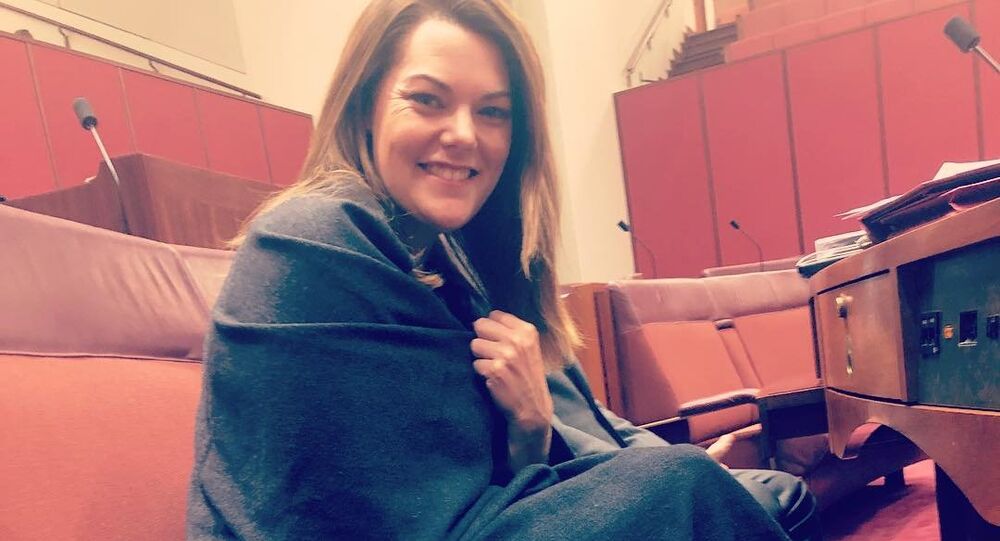 Uproar as Australian Senator Slut-Shamed for Showing 'Boobs Hanging Out'

The ethical issue has been gaining momentum in contemporary Australian politics, with politicians accusing each other of hurling personal, and at times sexist, abuse across the Senate chamber.

Australian Greens leader Richard Di Natale was shown the door in parliament for calling a Conservative politician who jeered at senator Sarah Hanson-Young a ‘grub’ and ‘an absolute pig’, while Hanson-Young herself directed a highly emotional speech at the men who had voiced insults in respect to her looks.

‘They don’t slut-shame them and they don't attack them and make them feel bullied in their workplace.’

On Wednesday, the conservative Spectator Australia magazine published a letter titled ‘Sarah Hanson-Young's credibility gap’, accompanied with a close-up image of the senator’s bust while she was donning a low neck dress.

The letter, which was purported to be from a female reader, sounded the following:

‘Watching Question Time and ABC analysis and wanting to pull my eyes out.’

‘If SHY wants to be taken seriously why is she wearing a dress in the Senate that looks like she's on her way to a Christmas party?’ the letter said, adding that ‘any woman with anything upstairs knows you don’t win a debate with your boobs hanging out’.

The letter instantly met a barrage of criticism from the country’s most prominent female journalists, as well as the general public. ‘On what planet is this acceptable to publish?’ one Twitter user asked, with another one remarking tongue-in cheek:

‘So I guess no one who works at or reads @spectator has seen boobs before, hey.’

After a flood of derogatory remarks, the letter was taken down from the edition, with no explanation given to this end.

In her turn, speaking to BuzzFeed, Hanson-Young blasted the initially published letter as ‘juvenile and pathetic’, continuing to say that the time when a woman was judged by the way she was dressed is already a distant past, and it is ‘offensive’ to bring up the issue.

‘It’s 2018, for heaven's sake,’ Hanson-Young said. ‘The suggestion that a woman’s opinion is not valid because of the way she dresses is as out of touch as it is offensive.’

‘Australian politics is having its #MeToo moment and it can’t come soon enough. Women on all side of politics are standing up for ourselves and parliament will be better for it,’ she concluded.

Meanwhile, Australian Senate leaders from both sides of the political spectrum told the Parliament the standard of behaviour needed to improve. The other day, Senator Di Natale was suspended from the Senate for refusing to withdraw comments he made while defending his Greens colleague, Sarah Hanson-Young. Speaking in the chamber, Senator Di Natale noted he would no longer keep silent and ignore the insulting comments made by his conservative colleagues.

‘They do it over and over and over again. Sometimes you don't hear it, but we do,’ he said, adding that they ‘hurt and damage’ and the behaviour needs to be reviewed.