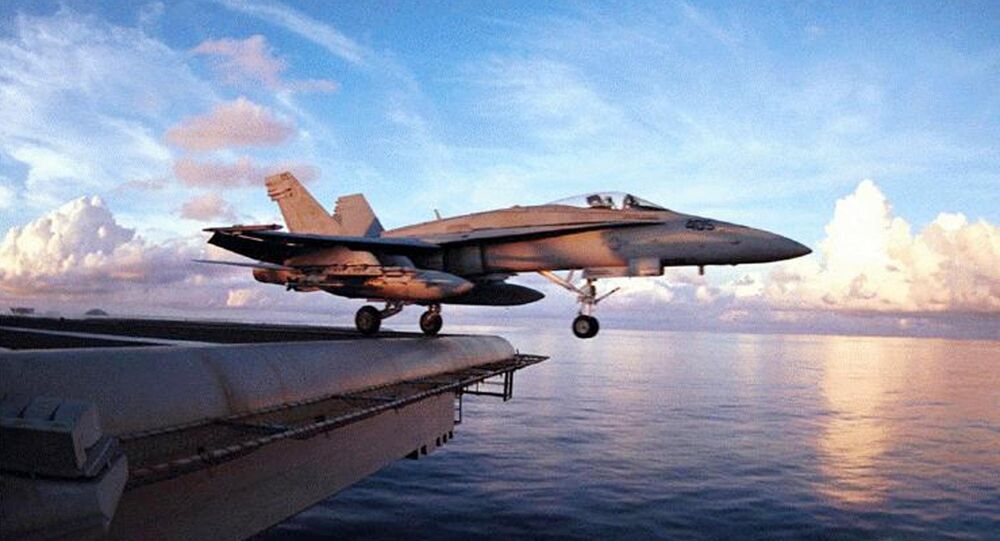 An F/A-18 American multirole fighter asssociated with the USS Ronald Reagan aircraft carrier crashed into the sea around 300 kilometres southwest of Kitaito-Shima in the Japanese prefecture of Okinawa, NHK television reported.

According to the US Navy, the two pilots on board have been rescued and are in good condition.

The fighter, which was based out of US Marine Corps Air Station Iwakuni in Japan's Yamaguchi Prefecture, crashed during a training exercise at around 11:45 am (02:45 GMT).

This is not the first incident involving a USS Ronald Reagan aircraft lately. In October, immediately after taking off, a US Navy MH-60 helicopter crashed onto its deck, causing several casualties.

© Sputnik / Grigoriy Sisoev
Crash, Boom, Bang: WATCH F-15 Fighter Jet's Emergency Landing at UK Airbase
Okinawa hosts most of the US military facilities in Japan. The authorities of the island prefecture have demanded a reduction in the US presence and a revision of the agreement on the status of their troops in the country. Local residents have repeatedly expressed concern that military facilities are located adjacent to residential areas.

In particular, residents and local authorities have demanded the withdrawal of Marine Corps Air Station Futenma from the prefecture, but it was previously decided to transfer it to the Henoko area, also in Okinawa.