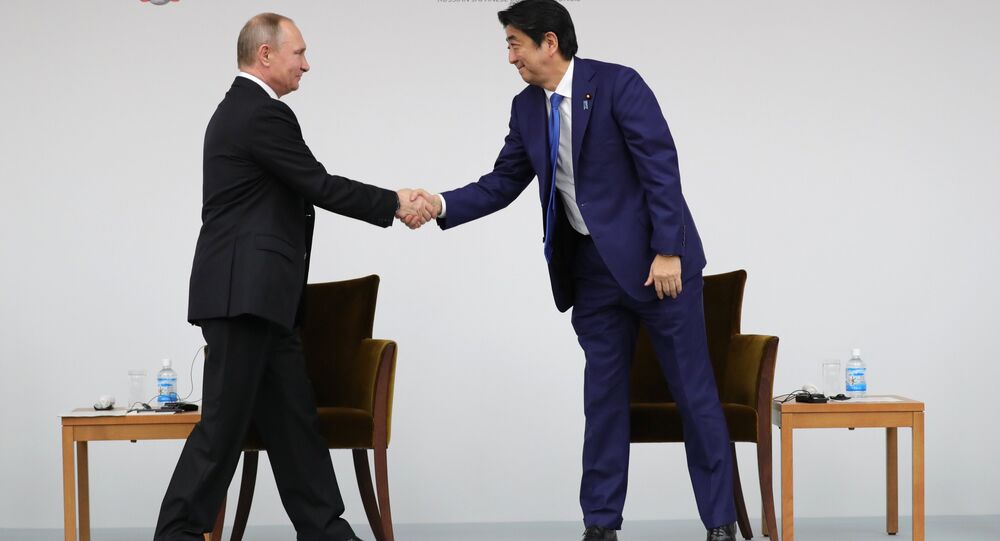 TOKYO (Sputnik) – Japanese Prime Minister Shinzo Abe plans to say to Russian President Vladimir Putin at the upcoming ASEAN Summit that the talks on the settlement of the bilateral territorial dispute over the Kuril Islands and the conclusion of a peace treaty between the two countries should be accelerated, Japanese media reported Saturday.

Abe also plans to suggest that these negotiations should be carried out on the basis of the 1956 Soviet–Japanese Joint Declaration stipulating the end of the state of war and the restoration of diplomatic ties between the two countries, Mainichi Shimbun reported.

© Sputnik / Ekaterina Chesnokova
Japanese Lawmaker Reveals What Will Help to Resolve Kurils Issue
The prime minister plans to reaffirm Tokyo’s commitment to one of the document’s provisions stating that the Habomai islets and Shikotan in the Kuril Islands archipelago may come under Japanese jurisdiction following the conclusion of a peace treaty with Russia, according to the newspaper.

The suggestion contradicted Japan’s original stance that called for recognition of the entire archipelago as Japanese territory as a precondition for the signing of the peace treaty, the outlet suggested.

Abe’s offer will also include the possibility of discussing the status of the Kunashir and Iturup islands, which is not covered by the 1956 declaration.

The prime minister will attend the ASEAN Summit in Singapore on November 14-15, the outlet noted.

Mainichi Shimbun suggested that by proposing to accelerate the talks on the Kurils and the peace treaty, Abe expected Moscow and Tokyo to reach a framework agreement during the Russian president’s visit to Japan for the G20 meeting in June 2019.

© Sputnik / Andrey Shapran
First Visa-Free Japanese Delegation Arrives in Kurils
Kremlin aide, Yury Ushakov, said on Wednesday that Putin planned to hold talks with Abe during his visit to Singapore for the ASEAN Summit, scheduled to begin on Sunday.

The fact that Japan and Russia never signed a permanent peace treaty after the end of World War II has long been a stumbling block in their bilateral relations.

During the Eastern Economic Forum (EEF), which took place in the Russian Far East city of Vladivostok earlier in September, Putin suggested that Moscow and Tokyo should conclude the peace treaty without any preconditions by the end of the year. Tokyo, in turn, maintained that it would sign the peace deal only after the long-time territorial dispute between the two countries was settled.

Tokyo and Moscow have been engaged in consultations on carrying out joint economic activities on the disputed islands.