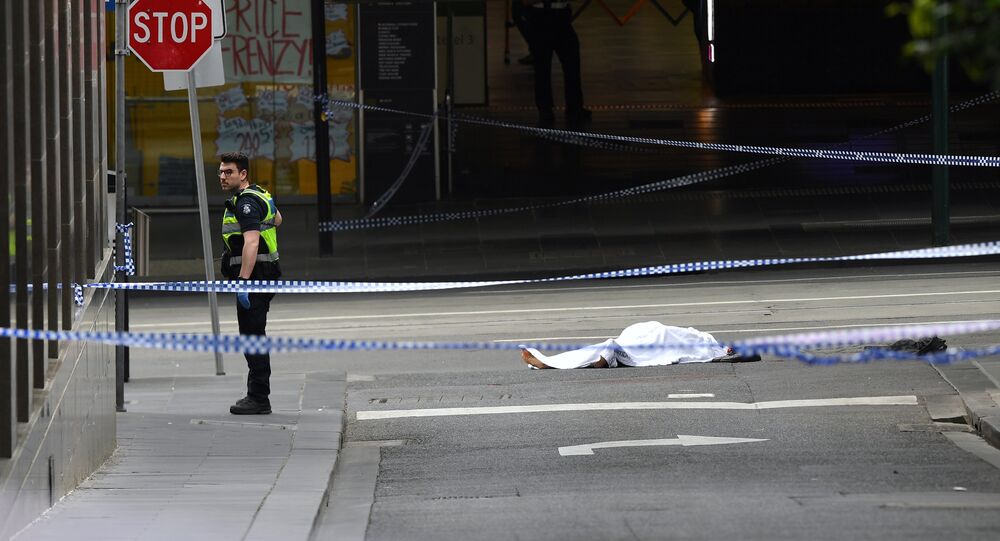 Police have shot a man who stabbed people on the street after setting his car ablaze on Bourke Street in Melbourne on Friday, killing one person and injuring two others, who are currently in hospital. The attack is the latest in a series of such incidents that have occurred in Australia.

On Friday, a stabbing attack took place in Melbourne, Australia leaving two people injured and one dead. Sputnik looks into some such high-profile attacks that have taken place in the 'land down under' over the last few years.

In February 2018, Bangladeshi national Momena Shoma was arrested after she stabbed a 56-year-old man in the neck while he was asleep at his Callistemon Rise home in Mill Park near Melbourne.

Shoma, who was charged with engaging in a terrorist act, told police  that she had travelled to Australia with the sole intention of killing someone on behalf of Daesh*.

READ MORE: Migrant Suspect in German Stabbing Attack Was Due for Deportation in 2016

According to her, she wanted to "trigger the West" and attacked Roger Singaravelu with a kitchen knife because he was "vulnerable" and "an easy target". Singaravelu suffered damage to his spine and hand as a result of the knife attack.

On April 7, 2017, a 15 year-old-boy and a 16 year-old-boy entered a service station in the town of Queanbeyan in the Australian state of New South Wales, where they stabbed several people with a steak knife, killing 29-year-old Zeeshan Akbar, an employee of Pakistani descent, and injuring three other men.

The teenagers wrote the letters "I S" in blood on the walls of the service station, with police alleging that the letters were written in the victim's blood, given DNA evidence. The pair were arrested after a second stabbing in the street in Queanbeyan following a police chase.

The 16-year-old's mother told police that her son could have been radicalised ahead of the stabbing and that he sympathised with Daesh, posting relevant messages on his Facebook page.

On September 10, 2016, 22-year-old Ihsas Khanman stabbed his 57-year-old neighbour Wayne Greenhalgh, who was walking his dog in Minto, a suburb of Sydney.

When attacking the older man, Khanman allegedly shouted "someone is going to die today". The perpetrator subsequently attempted to attack police, but was arrested shortly afterwards.

Khanman was charged with an attempted murder as police said that they were already aware that Khan had "strong extremist beliefs inspired by Daesh." Greenhalgh, who suffered serious injuries in the knife attack, was taken to hospital in a critical condition but managed to survive.

The federal government said that they had shot Haider "in self-defence" and that the victim was a known terrorism suspect.

Earlier, the two counter-terrorism officers who were stabbed by Haider, investigated the teenager over allegations he had recently unfurled a Daesh flag in a suburban shopping centre and made several inflammatory remarks about the Australian Federal Police on social media.