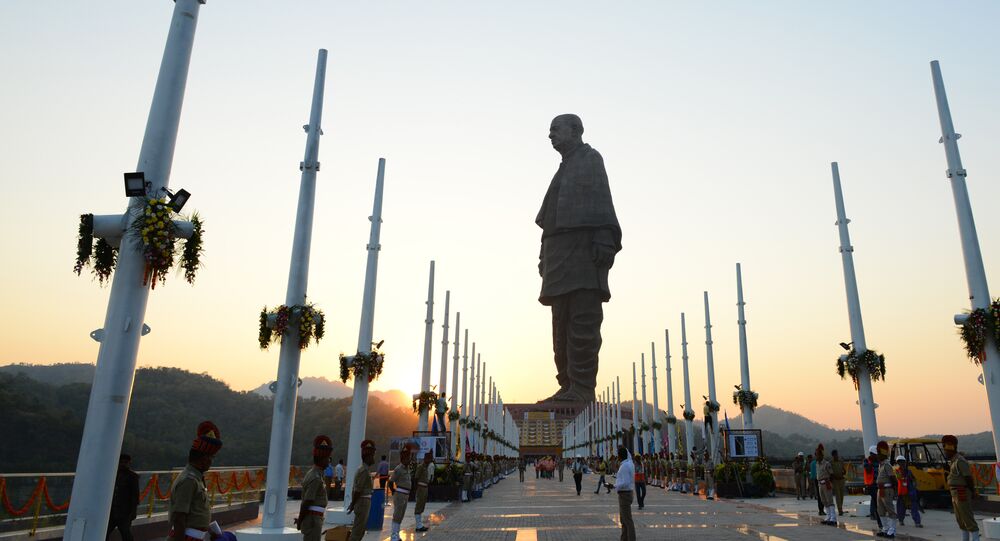 The World's Biggest Statues: Giant Structure in India Jumps to Top of the List

India's prime minister has unveiled the world's largest statue, a 182-meter colossus of independence hero Sardar Patel. Sputnik looks at statues around the world, some of which have not stood the test of time.

Narendra Modi attended a ceremony in a remote corner of Gujarat on Wednesday, October 31, to formally unveil a huge bronze statue of Sardar Vallabhbhai Patel, who is being promoted as a unifying national icon as party of the ruling BJP's campaign ahead of next year's general election.

Patel was India's first home minister after it became independent from Britain in 1947 and was known as the "Iron Man of India" for forcing around 500 princely states to join the Indian state after decades of loose rule as part of the British Raj. 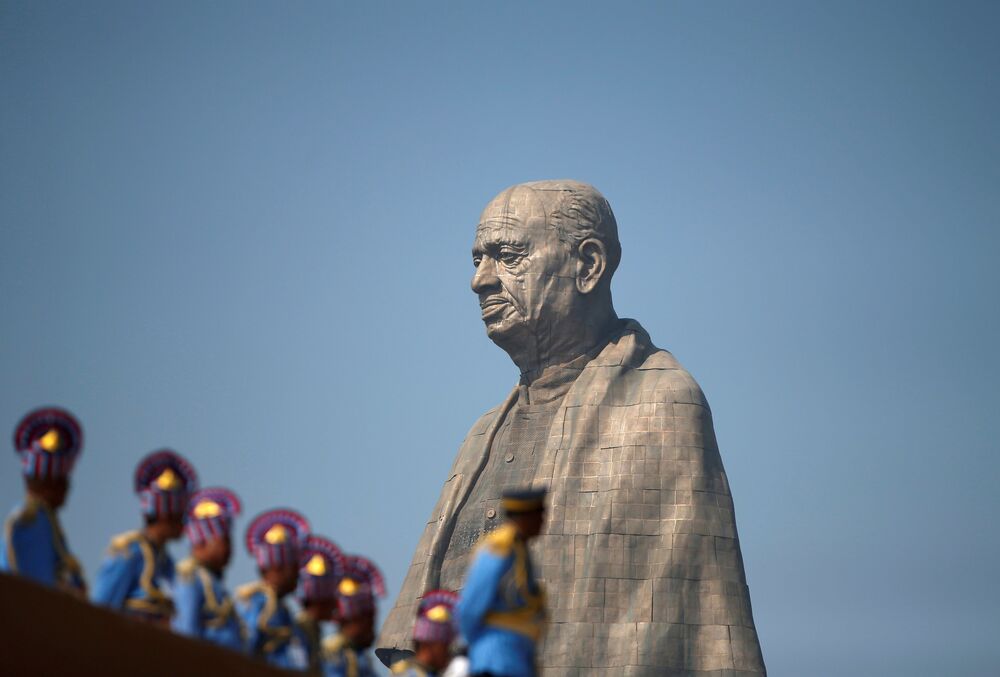 © REUTERS / Amit Dave
Police officers stand near the "Statue of Unity" portraying Sardar Vallabhbhai Patel, one of the founding fathers of India, during its inauguration in Kevadia, in the western state of Gujarat, India, October 31, 2018

The statue is the latest and largest in a long line of structures around the world.

The Patel statue in Kevadiya, a village in Gujarat, is almost 10 stories taller than the 153-meter Spring Temple Buddha statue in China.

The massive copper Buddha, which stands in the Fodushan Scenic Area in Henan province, was constructed between 1997 and 2008.

It sits on top of a giant lotus leaf which houses a monastery.

The statue was deliberately built to that size so it would be biggest than another massive statue of the Buddha, the Laykyun Sekkya, in Myanmar.

Statue of Liberty — US

For many years the biggest statue in the world was the Statue of Liberty in New York, which stands at 93 meters, but now looks like a paperweight compared to the Patel statue.

The statue was built by the French engineer Gustave Eiffel — he of tower fame — and donated to the US by the French government as a sign of goodwill.

It was first suggested by Édouard de Laboulaye in 1865, to congratulate the Union side for victory in the American Civil War and especially for the emancipation of millions of African-American slaves.

#OTD October 28th, 1886 the dedication of the Statue of Liberty takes place on #LibertyIsland. Over two thousand dignitaries and guests were in attendance. During the ceremony, President Grover Cleveland officially accepts the statue on behalf of the American people. #NPS #HBD pic.twitter.com/6zkJt3FWR6

​It was built in France and shipped over in crates, to be reassembled on Bedloe's Island in New York harbor, now known as Liberty Island.

President Grover Cleveland formally dedicated it in 1886 and thanked France, which had helped the US to gain independence from its rival Great Britain in the 18th century.

Ironically at the same time as the statue was being dedicated tens of thousands of Native Americans were being herded into reservations and their land seized by Washington.

Deep in the heart of South Dakota's Black Hills (Paha Sapa) — which are sacred to the Lakota (Sioux) people — the US government decided to carve a huge sculpture into the hillside to show just who is in charge around there. 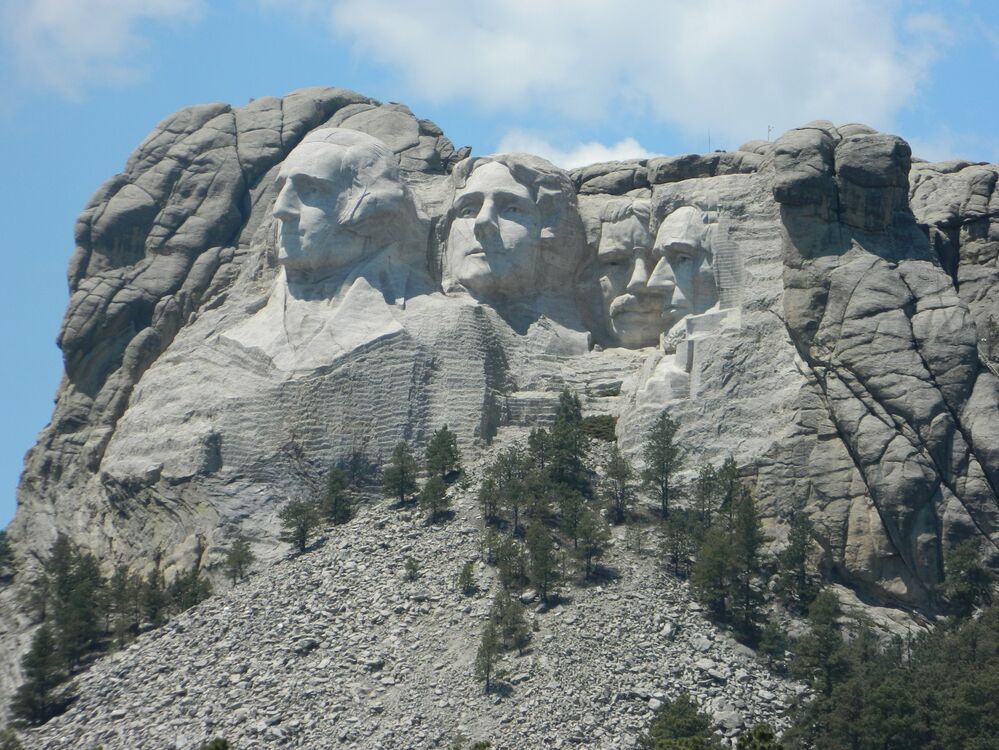 Between 1927 and 1941 the heads of former Presidents George Washington, Thomas Jefferson, Theodore Roosevelt and Abraham Lincoln were carved into the rock by sculptor Gutzon Borglum — whose parents had been Danish immigrants — and his son Lincoln.

The hillside was originally known by the Lakota as The Six Grandfathers (Tunkasila Sakpe) and tribal leaders were outraged by the sculpture.

In 1970 a group of Native American activists climbed Mount Rushmore to protest against their treatment by the federal government.

A few miles away from Mount Rushmore another mountainside in the Black Hills is being slowly transformed into a memorial to the great Oglala Lakota warrior Crazy Horse, who famously defeated General Custer at the Battle of the Little Bighorn.

The giant statue of Crazy Horse atop a war pony was designed by Polish-born sculptor Korczak Ziolkowski, who began work on it in 1948.

"My fellow chiefs and I would like the white man to know the red man has great heroes, too," said Chief Henry Standing Bear, in a letter to Ziolkowski urging him to create a likeness of the great warrior.

After Ziolkowski's death in 1982 his widow Ruth and their grandchildren continued with the sculpture, which is funded by donations.

The sculpture's final dimensions are planned to be for it to be 195 meters long and 172 meters high but work is proceeding slowly and no date has been given for its completion. 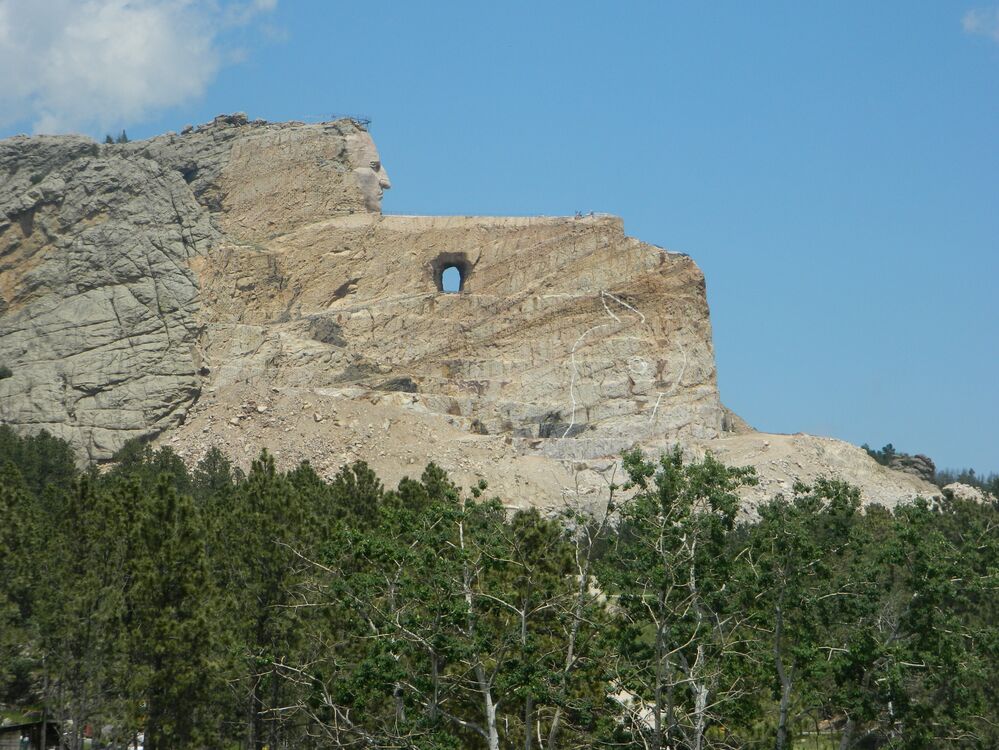 © RIA Novosti . Chris Summers/Sputnik News
Work began on the Crazy Horse statue in 1948 but this picture, taken in 2015, shows there is still a long way to go

The Patel statue is not expected to hold the title of world's tallest statue for long.

Work is about to begin on a 212-meter memorial to the Hindu warriror king, Chhatrapati Shivaji Maharaj, off the coast of Mumbai in India.

Shivaji ruled a Hindu kingdom in the west of India and clashed repeatedly with the Muslim Mughal Empire.

In 1665 he was invited to Agra by the Mughal Emperor Aurangzeb but was then imprisoned.

He used his wit and cunning to escape the following year and continued fighting the Mughals until his death in 1680.

Some statues do not stand the test of time.

In the 1970s it seemed like a good idea to create a huge bust of the US-backed dictator, Ferdinand Marcos, who appeared set to rule the Philippines forever.

A concrete bust bearing his likeness was erected in 1978 near the peak of Mount Shontoug, overlooking the main highway from Manila to Baguio.

But in 1986 Marcos — whose rule was marked by growing corruption and human rights abuses — was overthrown by "People Power" and was forced to flee to the US with his wife Imelda, who was famous for her enormous shoe collection.

In December 2002 treasure hunters blew up the bust with dynamite while searching for the infamous Yamashita treasure, which they believed to be inside.