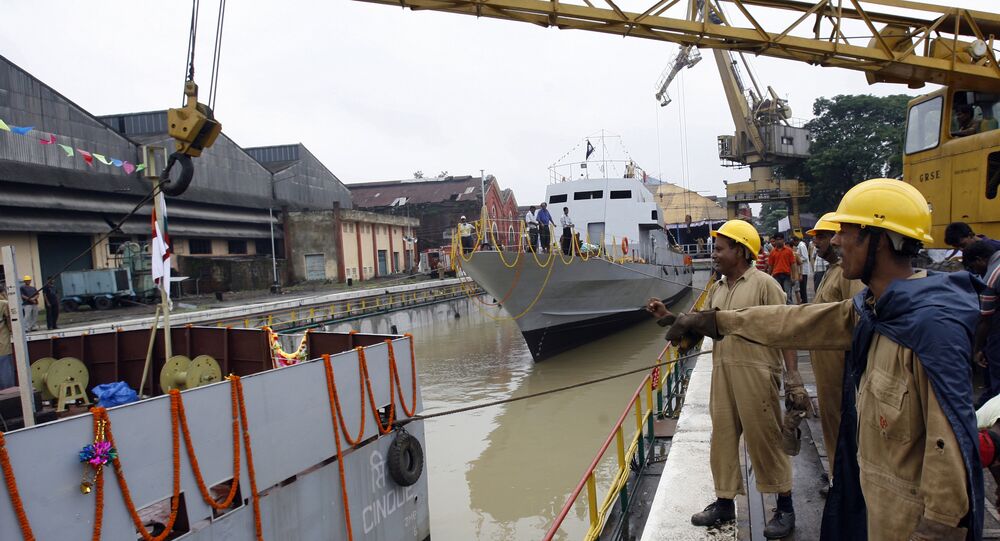 In the last two years, India’s arch-rival in the region China has launched several naval survey vessels for gathering oceanographic and geophysical data for defense applications.

India's Ministry of Defense has awarded a contract worth around $350 million for design, construction and supply of four survey vessels for the country's navy. The state-owned Garden Reach Shipbuilders and Engineers (GRSE) will deliver the vessels by 2023 with the first ship is to be delivered within 36 months of signing the contract.

The tender was floated in 2016 with GRSE emerging as the lowest and successful bidder among four state-owned firms and two private firms.

© REUTERS / Jean-Paul Pelissier
India, Japan to Sign Military Pact, But France Still Dominant in Indian Ocean
The 110 meter long vessels with a deep displacement of 3300 tons will be extensively used for defense purposes like the collection of oceanographic and geophysical data for defense applications. In their secondary role, these vessels shall be capable of performing limited search and rescue, limited ocean research and operate as hospital ship/casualty holding ships.

"The vessels are equipped with highly advanced state-of-the-art hydrographic equipment and sensors including a hello hanger to accommodate one advanced light helicopter," the Indian defense ministry statement reads.

The GRSE is currently handling another major project, the P17A that entails construction of three stealth frigates for the Indian Navy. The 98 warships built by GRSE so far range from advanced frigates to anti-submarine warfare corvettes to fleet tankers, fast attack crafts, etc. with the shipyard having many firsts to its credit in terms of innovation and design.