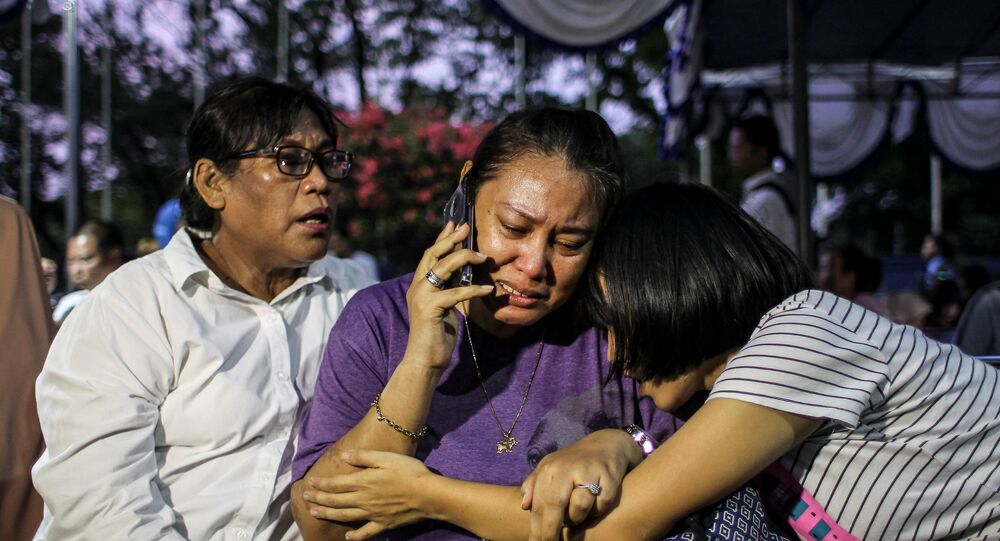 That is the first crash in the history of Boeing 737 MAX planes, which started being delivered to customers in May 2017. Lion Air was the first airline to buy this aircraft.

The plane was heading from Jakarta to the city of Pangkal Pinang, located on the Island of Bangka, but crashed into the Java Sea at 6:33 a.m. local time (23:33 on Sunday GMT), soon after the takeoff.

There were 181 passengers including three children, as well as two pilots and six other crew members on board the plane, according to the Indonesian National Transportation Safety Committee (KNKT). The list of passengers also includes 20 employees of the country’s Ministry of Finance.

A spokesperson for Indonesia's National Search and Rescue Agency (BASARNAS) told Sputnik that nobody survived in the plane crash. The search operation is underway.

According to the preliminary data of the Russian Embassy in Indonesia, no Russian citizens were on board the crashed plane.

The Indonesian authorities have launched an investigation into the deadly accident.

According to Lion Air, the plane was produced in 2018 and flew as part of the airline's fleet for the first time on August 15. The company also said that both pilots had 5,000–6,000 flight hours of flight experience each.

READ MORE: Plane With 189 On Board Crashes Into Sea Near Jakarta

Lion Air chief executive Edward Sirait said that the crashed plane faced technical problems during its previous flight, but they had been solved before the plane took off on Monday morning.

14 yr old Keshia Aurelia (on right) learned at school today that Lion Air flight 610 crashed minutes after take off from Jakarta. Her mother Fifi Hajanto was on the plane. “My mom is a very kind person. I don’t understand why. But maybe God has a way,” Keshia tells me. pic.twitter.com/gjg01Rn0GU

However, Indonesian Transport Ministry spokesman Bambang Ervan said that the pilots had requested a return to the base shortly before the crash.

Later, the BASARNAS spokesperson told Sputnik that a plane’s fuel tank had been recovered broken and exploded. Experts also found a leak above the fuel tank, according to BASARNAS.

The Boeing aircraft manufacturer has already expressed its readiness to provide technical assistance in investigating the crash.

Traffic jam is a source of anger but sometimes it can save life like that of this #Indonesian man who got stuck in #Jakarta's notorious traffic jam. Sony Setiawan arrived too late to catch the doomed #LionAir plane which plunged into the sea, killing 189 passengers & crew. pic.twitter.com/mwvsNAOVuF

A number of countries have already expressed their condolences to Indonesia over the deadly plane crash.

"Russia shares the grief of those who have lost their loved ones in this catastrophe, and wishes them to stay courageous and firm in such a difficult time," the telegram of Russian President Vladimir Putin to his Indonesian counterpart Joko Widodo said.

Pope Francis also conveyed his condolences to Indonesia over the incident.

"Having learned with sadness of the recent plane crash in Jakarta, His Holiness Pope Francis conveys his condolences to all those affected by this tragedy. He offers the assurance of his prayers for all who have died and for those who mourn their loss. Upon the nation and all involved in the rescue and recovery efforts His Holiness invokes the strength and peace of Almighty God," the Holy See's Secretary of State Cardinal Pietro Parolin said in a telegram of condolences.

The deadliest plane crash in Indonesia occurred on September 26, 1997, when an Airbus A300B4-220 of the Garuda Indonesia airline crashed into a mountain, killing 234 people.