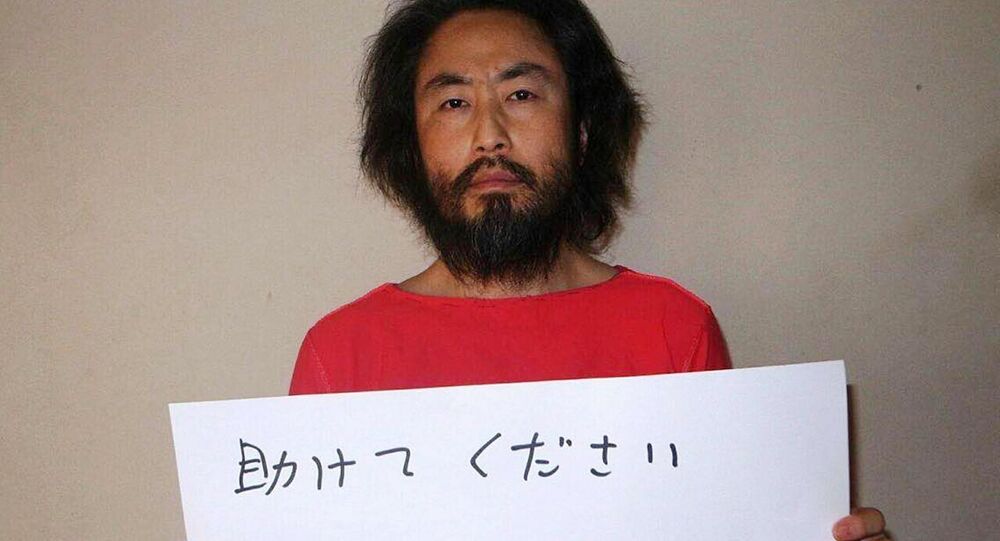 TOKYO (Sputnik) - Tokyo is verifying the identity of a man believed to be Japanese journalist Jumpei Yasuda who was freed from three years of captivity in Syria, Prime Minister Shinzo Abe said.

"I was relieved to learn about Yasuda’s [release]. We will confirm his identity as soon as possible," Abe told journalists on Wednesday.

© AP Photo / Militant website
Foreign Citizens Among Hostages Kept by Daesh in Syria's Hajin Area - Source
The military correspondent was taken hostage by a Syrian armed group in June 2015. Several videos of his pleas for help had since been circulated online. Japan was informed this week that its national was likely freed and staying in Turkey. At the press briefing, Abe thanked Turkey and Qatar for their mediation.

In 2015, Daesh terrorists posted a video of the execution of Japanese journalist Kenji Goto. The Japanese reporter went to a Daesh-controlled area and fell into the hands of the terrorists because he intended to rescue another Japanese hostage Haruna Yukawa, who had reportedly disappeared earlier in Syria.

Syria has been in a state of conflict since 2011, with numerous opposition groups and militant and terrorist organizations fighting the Syrian Army in an attempt to topple the government of Bashar Assad. Russia, along with Turkey and Iran, is a guarantor of the ceasefire regime in Syria and has also been providing humanitarian aid to residents of the war-torn country.