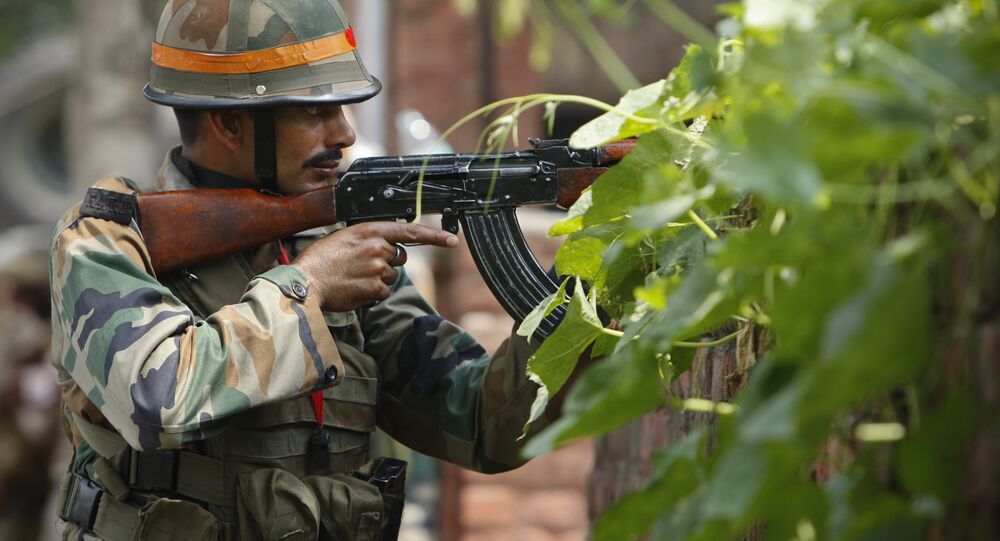 The Indian Army has alleged that terrorists have infiltrated India from Pakistan at least seven times since May of this year. On Sunday, three Indian soldiers lost their lives in an attack on the Line of Control (the de facto border between the two countries).

New Delhi (Sputnik) — India has sternly warned  Pakistan to rein-in terrorists after armed intruders attacked an Indian Army patrol in the Sunderbani sector of Jammu and Kashmir on Sunday, killing three soldiers. In another incident, seven civilians were killed and over 40 injured when an explosive went off as they were reportedly poking into the debris of a building that was damaged in an encounter with Jaish-e-Mohammad militants in south Kashmir's Kulgam district on Sunday.

"A large number of terrorists have been waiting near the Line of Control to infiltrate before the onset of snow. A stern warning has been conveyed to the Pakistan Army to restrain the terrorists operating from its soil," an unnamed Indian official was quoted as saying by the media.

The two countries have been engaged in a blame game over ceasefire violations for years. They blame each other for the deliberate targeting of the civilian population and term the act as "deplorable and contrary to human dignity and international human rights and humanitarian laws."

Pakistani and Indian troops often exchange fire in Kashmir along the UN-designated Line of Control. Over the last two years, the number of ceasefire violations from both sides has increased manifold. The two sides had signed a ceasefire agreement in 2003 to maintain peace along the border.