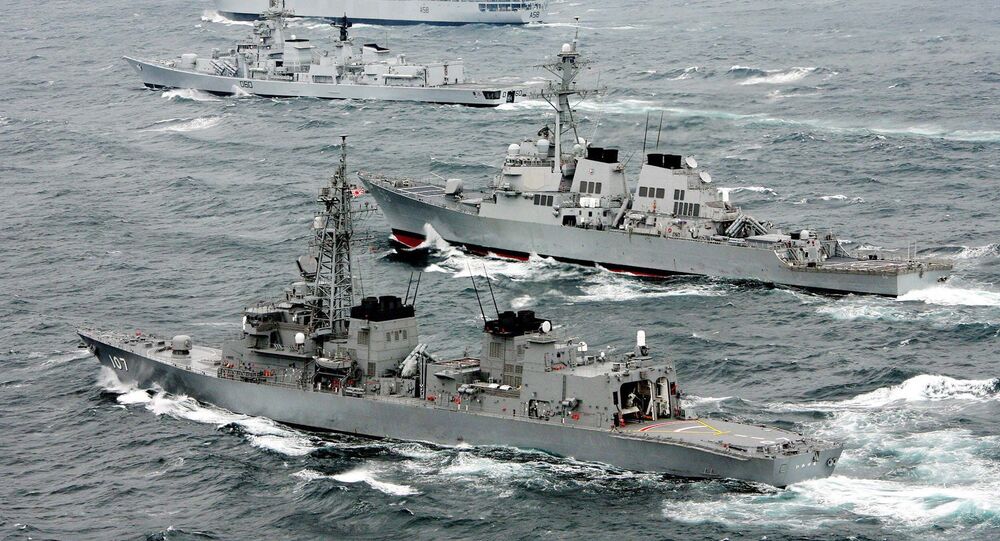 The current policy of the Indian government dictates that the Indian Navy may not enter into any kind of a collaborative operation or joint patrolling of the South China Sea with the Japanese naval force. However, the two navies intend to augment the maritime capacity of countries in the Indo-Pacific region.

India and Japan have resumed the bilateral maritime exercise JIMEX-18 in Indian waters after a hiatus of five years. The eight-day-long JIMEX-18 will include anti-submarine warfare exercises, VBSS (visit, board, search and seizure) drills, gun firings, cross deck Helo operations and coordinated operations in anti-submarine/ anti-air threat scenarios. The last JIMEX exercises was conducted in Dec 2013 near the Indian city of Chennai.

"The conduct of JIMEX-18 after five years is indicative of an upswing in Indo-Japanese defense relations and the continued efforts of both the governments to work closely to enhance the safety and security of the global commons in keeping with ‘rule-based order'," a statement issued by the Indian Navy reads.

© AFP 2021 / INDRANIL MUKHERJEE
India, Japan Gearing Up For First Joint Military Exercise
The Indian Navy will be represented by a destroyer, multipurpose stealth frigate, anti-submarine warfare corvette, a missile corvette along with one submarine, P8I long-range maritime patrol aircraft and a number of integral helicopters. JIMEX-18 is aimed to enhancing interoperability, improving understanding between the Indian and Japanese naval forces and allowing the respective forces to observe the best practices of their counterparts.

"I will not consider the bilateral exercise at a gap of five years because the navies of the two countries used to engage bilaterally whenever the Malabar exercise was held in Japanese waters. But, yes, this is an indication that Japan is trying to grow its outreach in the Indian Ocean; fundamentally, because it is in urgent need to secure its sea line of communication," Cmde. Abhay K Singh (Retd), Research Fellow at the Institute for Defence Studies and Analyses in New Delhi, told Sputnik.

In August this year, India and Japan had reaffirmed that they have shared interests in expanding cooperation in the maritime security domain and welcomed the fact that the Japan Maritime Self-Defense Force (JMSDF) and the Indian Navy were working towards the signing of the Implementing Arrangement for Deeper Cooperation.

"With the aim of deepening bilateral cooperation in this domain, the (cabinet) ministers also reaffirmed their intention to pursue cooperation in engaging with the countries of the Indo-Pacific, including through their capacity building," the joint statement issued after the India-Japan annual defense ministers' dialogue read.

However, going by the present policy of the Indian government, it is very unlikely that the Indian Navy will engage in joint patrolling or any kind of collaboration with the JMSDF in the South China Sea.

"I don't think there will be any kind of joint collaboration with Japan in the South China Sea in the near future, which is indicated by the Indian government policy in the recent past as well," Cmde. Abhay K Singh (Retd) concluded.