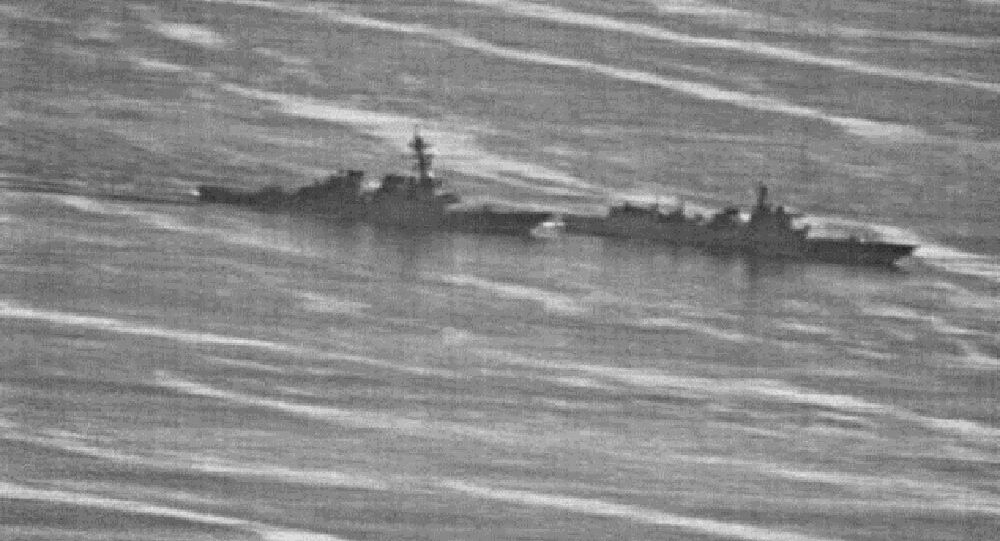 Beijing’s claims to disputed islands in the South China Sea have put it on a collision course with the US, which maintains that it will carry out freedom-of-navigation patrols in areas that China views as its territorial waters.

New photos show the tiny distance separating a US guided missile destroyer and a Chinese warship sent to ward off the American ship that had sailed close to the remote Spratly Islands, claimed by China, gcaptain.com wrote.

A sequence of US Navy photos shows the exact moment the USS Decatur, pictured on the left, “slams on the brakes” to avoid ramming the Chinese Luyang destroyer.

© AP Photo / MC2 Marcus Stanley
US Sends Ships ‘All the Way to the South China Sea to Create Trouble’ - Chinese Envoy
In an interview with the military newspaper Stars and Stripes, Lieutenant Commander Tim Gorman said that during the Sunday encounter, the Chinese ship “approached within 45 yards of Decatur's bow, after which Decatur maneuvered to prevent a collision.”

The USS Decatur was conducting a “freedom of navigation operation” Sunday within 12 nautical miles of the remote Spratly Islands, claimed by China.

Twelve nautical miles are the commonly accepted distance that constitutes the territorial waters of the landmass of the Gaven and Johnson reefs.

© Photo : U.S. Navy
The People's Liberation Army opposes the 'freedom of navigation' operations conducted by the US in territory it considers China's, and sent a navy vessel to head off the American ship

Collin Koh Swee Lean, research fellow at Singapore's S. Rajaratnam School of International Studies, said the incident would have been a violation of the Code for Unplanned Encounters at Sea, agreed to by China and the US in 2014 to reduce the chance of accidental encounters and reduce the risk of escalation if one occurs.

In Beijing, the Defense Ministry said that the Chinese ship had “given a warning to leave” to the US vessel after it entered the area “without permission.”

“The US has repeatedly sent warships into the territorial waters near Chinese reefs and islands in the South China Sea,” the ministry said in a statement, adding that the Chinese military “will continue to take all necessary measures to safeguard our sovereignty and regional peace and stability.”

In May, a pair of US warships sailed within 12 miles of four of the Paracel Islands in the South China Sea.

US-Chinese relations have deteriorated since Donald Trump took office in 2017, with escalating trade disputes and tariff hikes, exacerbated by a newly announced US military equipment sale to Taiwan and some recent military operations.

Three US officials confirm that images obtained by @gCaptain are US Navy images of the "unsafe & unprofessional" encounter between the USS Decatur and a Chinese destroyer that took place Sunday while the US warship was sailing near Gaven Reef in the South China Sea pic.twitter.com/A8Z4YPuXBS

​Beijing hit back with a volley of retaliatory measures, canceling a planned visit by a US warship to Hong Kong and a meeting between Chinese and US navy commanders.

The South China Sea is one of the world's most sensitive areas. Beijing's extensive territorial claims to the sea, which include islands, banks, reefs and maritime ways, are challenged by Vietnam, Malaysia, the Philippines, Brunei and Taiwan, which also have counter claims.

Beijing has built installations on strategically located islands in the region, which is considered to be rich in natural resources, and also handles some $5 trillion in annual global trade.