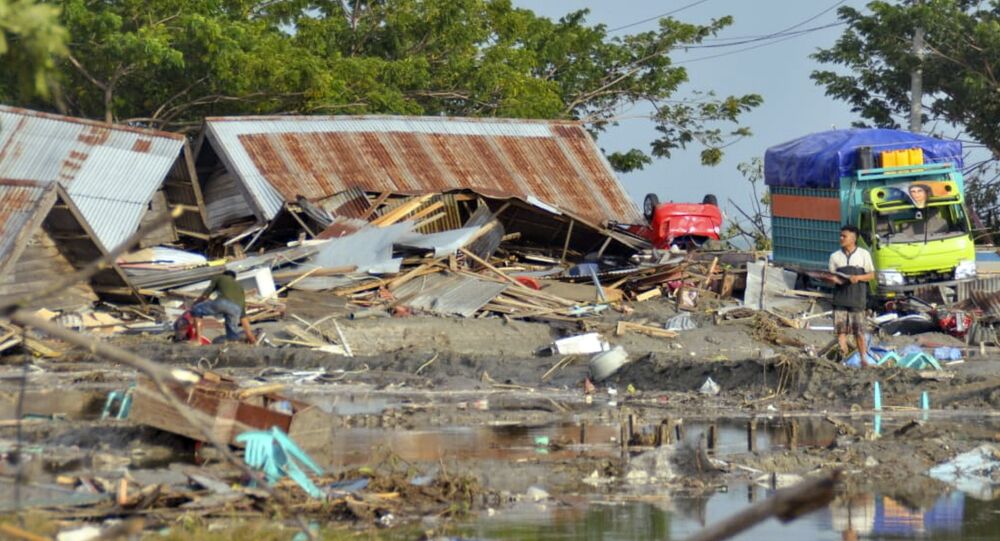 A tsunami up to two meters high formed on the Indonesian island of Sulawesi after a strong 7.7 magnitude earthquake.

As a result of the earthquake and tsunami on the Indonesian island of Sulawesi, 384 people have died and hundreds have been injured, according to the latest data.

This data was announced by Dr. Komang Adi Sugendra, a representative of a local hospital.

Meanwhile, on the other side of the planet, far away from the #Kavanaugh vote in Washington DC, a #tsunami slammed into the Indonesian city of Palu after a major earthquake. pic.twitter.com/YPX9pL0pLX

​Rescuers are doing everything possible to get to the places of destruction, according to CGTN.

Russian citizens are unlikely to be among those affected by Friday's earthquake and subsequent tsunami in Indonesia since the region that was hit by the natural disaster is not popular with tourists, Denis Tetyushin, the representative of the Russian Embassy in Jakarta, told Sputnik on Saturday.

"We have approached the official bodies with a request, we have not received an official response [regarding the possible victims] so far. The Russian citizens have not contacted the embassy so far, and we believe that there have been [no Russian citizens] there, as it is not a tourist area at all," Tetyushin said.

According to the latest reports, 540 people were injured, 29 are missing.

​​In photos from Palu, in which about 350,000 people live, bodies can be seen scattered on the shore.

At least 48 killed in Indonesia tsunami and earthquake, ‘many bodies’ found https://t.co/DmD8J2FM0V pic.twitter.com/o3KQHXWmRu

Earlier, the European Mediterranean Seismological Center reported that a magnitude 7.4 earthquake occurred off the coast of Sulawesi, 80 kilometers north of the city of Palu. The outbreak lay at a depth of 10 kilometers; a tsunami threat was announced, but later canceled. The National Disaster Management Agency (BMKG), in turn, reported a 7.7 magnitude earthquake.