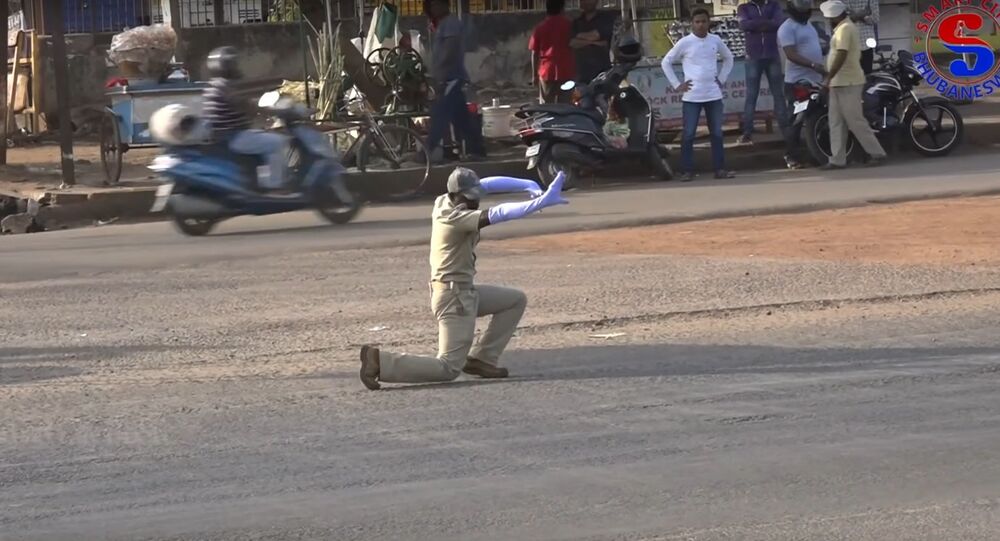 Managing traffic in the densely populated cities of India is extremely tasking on the cops. But in Bhubaneswar, a traffic cop has earned the distinction of becoming the most efficient traffic manager as he lures commuters into obeying traffic rules with his unique dance moves.

New Delhi (Sputnik): Pratap Chandra Khandwal is a darling to the people of Bhubaneswar, the capital city of the eastern Indian state of Odisha. His unique appeal lies in the dance he performs while conveying to the onlookers the importance of following traffic rules. His efforts have not only won the hearts of the local public but foreigners too, who visit the city.

Speaking to Sputnik, Khandwal said that "the job of a traffic police is monotonous and tiring and many times one becomes angry and frustrated when commuters don't follow the traffic rules. But through my dancing moves, I not only keep myself free from anger and monotony but the people also obey the traffic rules."

33-year-old Pratap Chandra Khandwal has been working as a traffic cop for the last four years and has mastered his dancing moves through practice and experience.

The "dancing cop" often mans the traffic at Shriya Square in Bhubaneswar.

"Although several times I ignore the traffic rules in the city but Khandwal makes us obey. His energy and enthusiasm is amazing. He is the pride of our city," Abhay Pratap, a local student told Sputnik.

Khandwal is not the only "dancing traffic cop" in India. Ranjeet Singh, a traffic police in Indore in the central Indian state of Madhya Pradesh, amuses commuters with Michael Jackson's "moonwalks" in the chaotic traffic.

Traffic accidents went down significantly when India's Dancing Traffic Cop got the attention of drivers. Maybe US police departments could send some officers to study with him instead of the Israeli Army. https://t.co/fbkCl8wj92 https://t.co/xKx3eDhptG