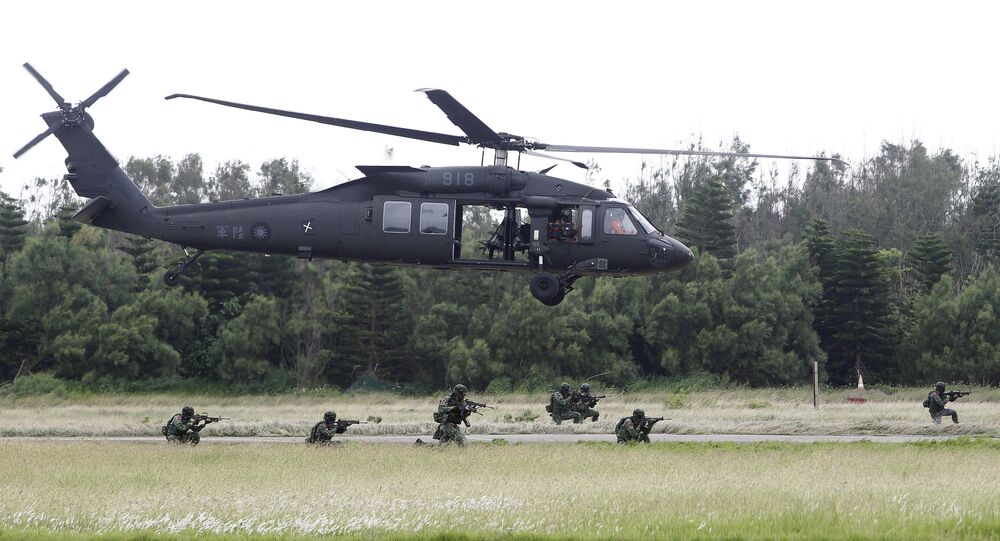 BEIJING (Sputnik) - China has issued a note of protest to the United States over its plans to sell aircraft spare parts to Taiwan, Geng Shuang, the Chinese Foreign Ministry's spokesman, stated.

"The Chinese side expresses its utmost discontent and strong protest over the US plans to sell arms to the Taiwanese side, and has already lodged a related representation to the US side," Geng said at a press briefing.

He called the US to move a serious breach of the international law and international relations standards, which also threatened China's sovereignty and security.

"The Chinese side is strongly urging [the United States] to abandon the plan on arms deliveries to Taiwan and to cease the US-Taiwan military ties in order to avoid significant damage to the Chinese-US trade relations, peace and stability in the Taiwan Strait, as well as the Chinese-US cooperation in different areas," Geng said.

© AP Photo / Ken Moritsugu
Beijing Slams UK for South China Sea 'Provocation', Urges London Not to 'Take Sides'
The US Defense Security Cooperation Agency announced on Monday that the US State Department would deliver $330 million worth of parts for Taiwan’s F-16, C-130, F-5, Indigenous Defense Fighter and other aircraft systems.

China has been repeatedly calling on other countries to cut their ties with Taiwan. It has already slammed the United States for maintaining informal diplomatic relations with Taiwan and selling weapons to the region in spite of formally sticking to the "One China" policy stipulating that Taiwan is a Chinese territory.

In March, US President Donald Trump signed the Taiwan Travel Act that sought to stimulate visits between officials from Taiwan and the United States. The Chinese Defense Ministry then said it was viewing the move as direct interference in China's domestic affairs.

The situation is exacerbated by the fact that China and the United States have been engaged in a trade war for several months.

© CC0 / Pixabay
US Recalls Envoys From 3 Central American States Over Taiwan Recognition Row
Official relations between central Chinese authorities and Taiwan stopped in 1949 when the Kuomintang government led by Chiang Kai-shek fled to Taipei after being defeated by the Chinese Communist Party, establishing the Republic of China on the island. Informal contacts resumed in the 1980s. Beijing does not recognize Taiwanese independence and claims the island is part of China. Taiwan similarly does not recognize the central government in Beijing.
...
Reddit
Google+
Blogger
Pinterest
StumbleUpon
Telegram
WhatsApp
30