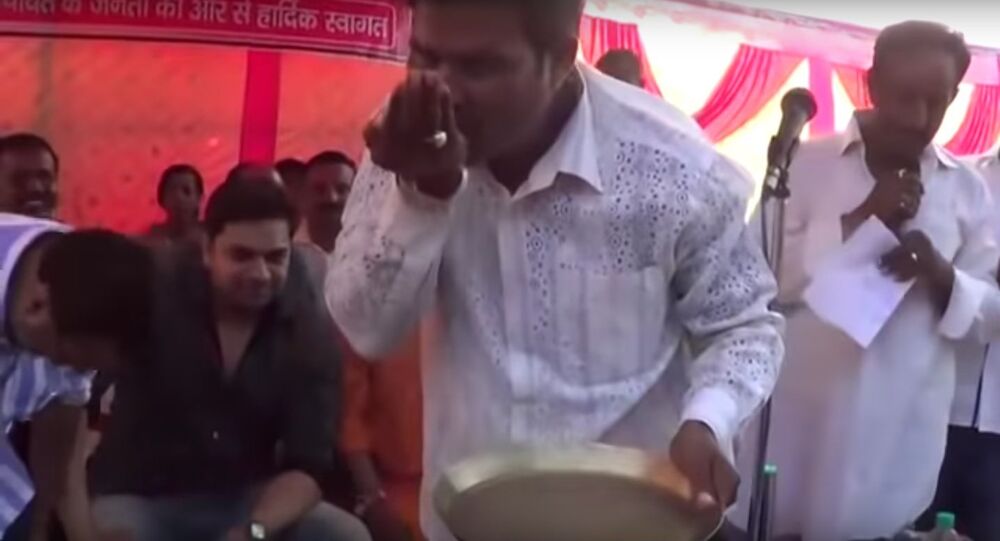 The viral video shows a supporter placing lawmaker Nishikant Dubey’s feet on a brass plate, washing and wiping them with cloth and proceeding to drink the dirty water from the plate. Though the politician has defended the incident as a common practice in the state of Jharkhand, social media users have slammed him for allowing such indignity.

New Delhi (Sputnik): A video that went viral shows a supporter placing lawmaker Nishikant Dubey’s feet on a brass plate, washing and wiping them with cloth and proceeding to drink the dirty water from the plate.

A lot of Indians are venting their ire on social media after the politician was seen having his feet washed by a supporter who later drank the dirty water. The viral video has garnered much attention on social media with users describing it as "heights of sycophancy."

The lawmaker, identified as Nishikant Dubey of the ruling Bharatiya Janta Party (BJP), courted controversy by saying that those trolling him on social media are unable to understand the love supporters have for him.

"It a common custom to honor guests in Jharkhand," Dubey was quoted by the local media.

That is one of the most disgusting thing I saw recently. what a shame.

He didn't even tried to stop him