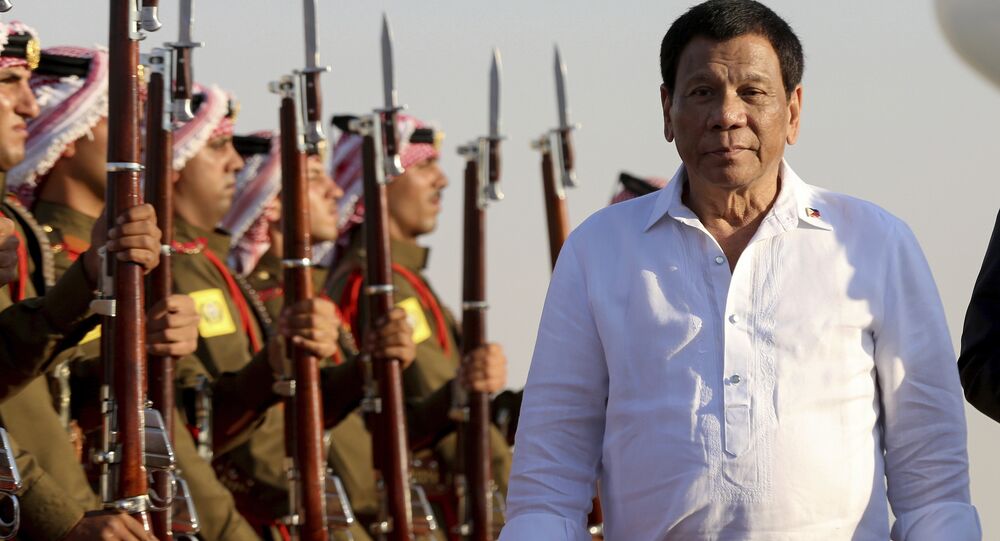 President Duterte lashed out at the armed forces on Tuesday and alleged that someone was planning to kill him. In the same interview, he mentioned the political party led by his critic Antonio Trillanes, who was involved in two failed revolts against Duterte's predecessor in 2003 and 2007.

Philippines President Duterte said in a televised statement on Tuesday he had evidence that a group of opposition politicians, Maoist rebels and former military officers were plotting to bring him down or kill him. He didn't detail which foreign power gave the tipoff but said that the information would be revealed in the coming days.

"Someone said that's their plan now. If they can't achieve their goal through explosions, they will assassinate," he said, as quoted by the Wall Street Journal.

READ MORE: Philippines' Duterte Touts Israel as 'the Only Country' to Buy Arms From

The Philippines' strongman went as far as to dare the military to remove him in a coup. "I am challenging Magdalo to start now," the 73-year-old president said, referring to his nemesis Senator Trillanes's political party, whose members include former military officers. "Just make sure that the soldiers and the generals are yours. Let's show Filipinos what you really want."

Duterte made the statement hours after the Supreme Court denied the plea of Antonio Trillanes IV for a temporary restraint order. It said that it would refer the matter to two lower courts that previously heard charges against the restive senator, who was pardoned by former president Benigno Aquino III for his two failed brief military uprisings against then-President Gloria Macapagal-Arroyo in 2003 and 2007. The Supreme Court also ruled that Trillanes cannot be taken into custody without a warrant.

The decision came after Duterte revoked Trillanes's amnesty more than a week ago in a bid to force his arrest and try him in a military court. The Philippines' President claimed that the paperwork that granted his amnesty was improperly filed and that Trillanes hadn't sufficiently admitted guilt. Since then, the opposition lawmaker has taken refuge in his Senate office to avoid arrest.