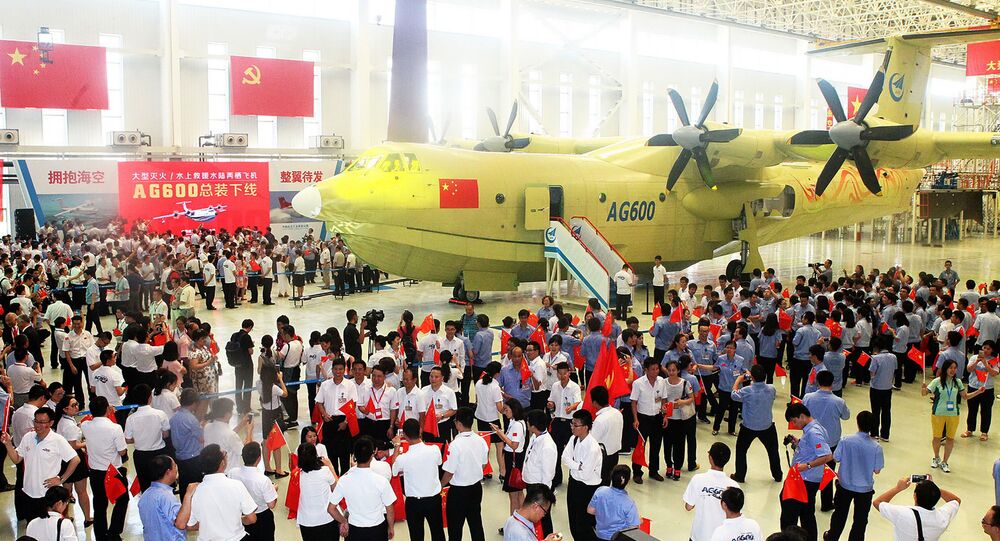 Beijing is busy modernizing its military amid ongoing territorial disputes in the South China Sea. A British Royal Navy warship entered on Thursday, before being warned to leave by China’s navy.

While the AG600 is mainly designed to support maritime search-and-rescue missions, military observers say it could also be used to transport troops or even carry out reconnaissance missions.

© AP Photo / Xinhua/Liang Xu
China Stages Maiden Flight of ‘World’s Biggest’ Amphibious Plane
The biggest such aircraft around and the first of its kind built in China, the AG600 is 120 feet long with a 128-foot wingspan. It has a range of 2,800 miles and is able to take off and land in 6.5-foot high waves.

According to the newspaper, the AG600  is powered by four turboprop engines, can carry up to 50 people during search-and-rescue operations, and can scoop up 12 tons of water.

With a maximum take-off weight of 53.5 tons, it surpasses both Japan’s ShinMaywa US-2 and Russia’s Beriev Be-200 amphibious planes.

Chinese companies and government departments have already placed 17 orders for the aircraft, which is part of Beijing’s ongoing modernization of its military amid territorial disputes in the South China Sea.

When fully operational, the AG600 would shift the balance of power in the disputed region with its ability to quickly transport troops and supplies, as well as provide other support, such as evacuating garrisons in the South China Sea.

The aircraft can also be used for rendering support to foreign vessels in the area and for search and rescue operations, the newspaper wrote.

It also quoted Beijing-based military analyst Song Zhongping as saying that the new amphibious aircraft would enable China to improve the administration and control of its vast marine territory.

“The AG600 can link countless islands in the South China Sea and play a big role in law enforcement, emergency rescue and even reconnaissance,” Song said.

He added that the AG600 would also be a valuable addition to Beijing’s military exports.