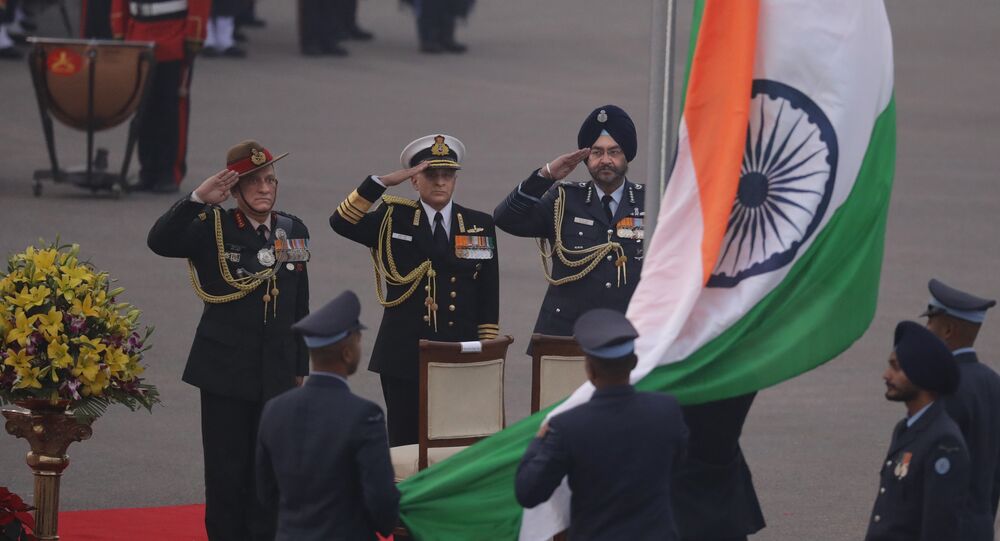 The Indian Army Chief's statement comes against the backdrop of a report published in the New York Times which said that Pakistan’s military was quietly reaching out to arch-rival India for a resumption of peace talks.

The chief of the Indian Army General Bipin Rawat has urged Pakistan to reign in terrorist elements in the country before seeking friendly relations with India.

"They should make the first move; they should stop terrorism. If they stop terrorism, we will also be like Neeraj Chopra," Gen Bipin Rawat said at an event to honor Asian Games medalists from the Army on Wednesday.

If Pakistan stops terrorism, the Army would also "be like Neeraj Chopra", #ArmyChief General Bipin Rawat has said, referring to the #AsianGames javelin gold medalist's gesture of reaching out to his Pakistani competitor https://t.co/HtXT54TmNR pic.twitter.com/2HYq9TiyhY

​Athlete Neeraj Chopra, presently employed with the Indian Army as a Naib Subedar, attracted huge attention during the recently-concluded Asian Games when he stood flanked by a Chinese and a Pakistani athlete on the podium. The picture of Chopra shaking hands with Pakistan's Arshad Nadeem, who won the bronze, on the podium went viral on social media.

Neeraj Chopra made history after winning the country’s first gold medal in the javelin throw. Internet was not just celebrating victory, but also an image of Neeraj shaking hands with Pakistan’s Arshad Nadeem@Neeraj_chopra1#SportySaturday#NewsRoomPost pic.twitter.com/xuTPYTovHZ

© REUTERS / Faisal Mahmood
Pakistan Vows to Pursue Peace With India, Afghanistan
The New York Times had reported that Pakistan's top army commander, Gen Qamar Javed Bajwa, had offered to resume the on-and-off talks with India over the border dispute in the Kashmir region, stalled since 2015 following several terror attacks on Indian military camps, but that the Indian side did not exhibit any interest in the proposal.

Pakistan's powerful military is secretly reaching out to India for peace talks, due to its growing international isolation. New York Times. https://t.co/iGANBswhiR

Nevertheless, Indian Army Chief Bipin Rawat has sent out a positive signal by saying that the situation in Kashmir improved in 2017 as compared to the year before and it was improving further in 2018.

"This action (by the security forces) will continue, but I can say with confidence that among the youth and their families there is a belief that this is not the right path. I see in many places that the mothers have urged their sons to come back and if this action continues, I am confident that we will be able to address the problem of terrorism. And slowly the youths who have become radicalized will come home," Rawat added.

Since Imran Khan took over as prime minister of  Pakistan, there have been several developments that are indicative of a thaw in the relationship between the two countries.

"Pakistan looks forward to a mutually beneficial, uninterrupted dialogue with India to resolve all issues," Pakistan's Foreign Ministry had said on August 21 after Prime Minister Narendra Modi, in a congratulatory note to Pakistan's new Prime Minister Imran Khan, expressed India's commitment to " build good neighborly relations between India and Pakistan and pursue meaningful and constructive engagement for the benefit of the people of the region."