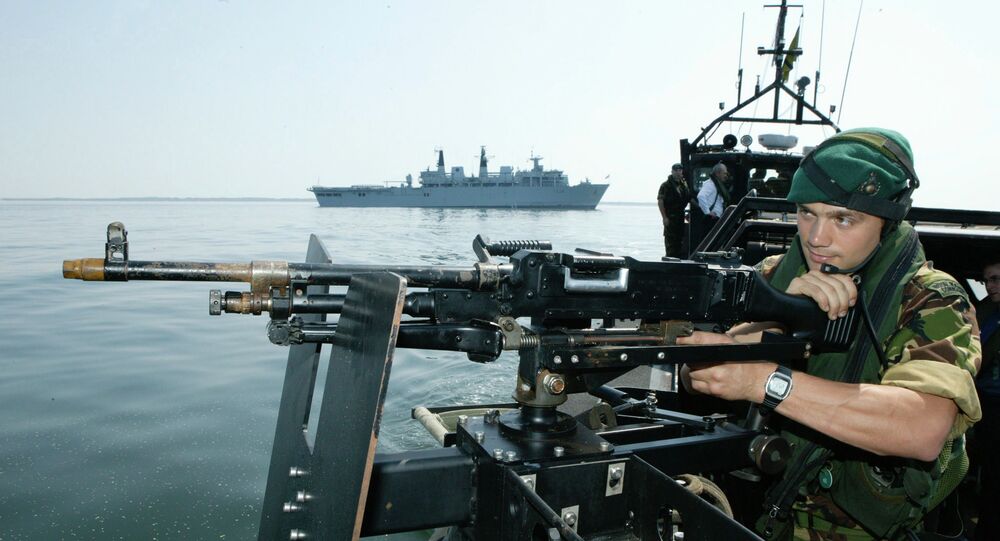 The Chinese government slammed “provocative actions” by the UK after the appearance of a British HMS Albion Warship off the Paracel Islands.

The HMS Albion, the British Royal Navy amphibious flagship, passed the Paracel Islands in recent days, the sources told Reuters. The warship was on its way to Ho Chi Minh City, where it docked on Monday, following the deployment in and around Japan.

According to Reuters’ sources, China dispatched a frigate and two helicopters to challenge the vessel yet both sides did not interfere with each other as the warship didn’t enter the territorial waters. The sources said that the action by Albion was meant to demonstrate that Britain does not recognize excessive maritime claims around the Paracel Islands.

© AFP 2021 / STR
Chinese Navy Runs Anti-Aircraft Drills in South China Sea After B-52 Flyby
The Paracel Islands are under the dispute between China, Vietnam, and Taiwan. China’s Foreign Ministry issued a statement, saying that the British Navy ship had entered Chinese territorial waters on August, 31 without permission and was warned by the Chinese navy to leave.

“The relevant actions by the British ship violated Chinese law and relevant international law and infringed on China’s sovereignty. China strongly opposes this and has lodged stern representations with the British side to express strong dissatisfaction,” the ministry added, saying that China urges the British side to “immediately stop such provocative actions.”

The British Navy has previously sailed close to the disputed Spratly Islands, further south in the South China Sea and not far from Paracel Islands, several times in recent years but not within the 12 nautical mile limit, regional diplomatic sources have said.

A spokesman for the Royal Navy said that “HMS Albion exercised her rights for freedom of navigation in full compliance with international law and norms.”

China’s claims in the South China Sea, through which about $3 trillion of ship-borne trade passes yearly, are contested by Brunei, Malaysia, the Philippines, Taiwan, and Vietnam. Britain does not have any territorial claims in the area. Beijing says that they are claiming their own territories back and need the islands for necessary civil and self-defense purposes.

© AP Photo / Francis Malasig/Pool Photo
China Views US Claims on South China Sea Militarization as Meddling – Official
The issue around Albion came in a delicate time of the preparations for post-Brexit talks between China and the UK. Britain has been counting on the start of the negotiations with China for a free trade deal. However, the Chinese Foreign Ministry in its statement said that the incident might be "harming the broader picture of bilateral relations and regional peace and stability."
...
Reddit
Google+
Blogger
Pinterest
StumbleUpon
Telegram
WhatsApp
302