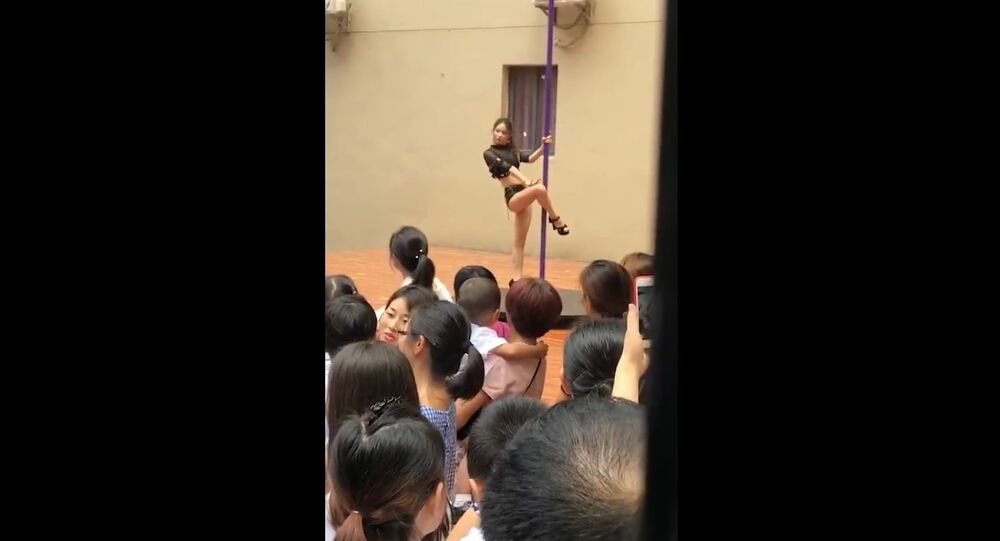 A pole dance is probably one of the last things you'd expect to see at a kindergarten after summer break. Well, not in China, it seems. Frustrated parents have lashed out at the principal, who had tried to spice up a formal school ceremony with the help of a scantily dressed lady.

On Monday, parents and children aged between three and six gathered at a back-to-school event at a kindergarten in the city of Shenzhen in southern China to see a pole dance performance, much to their amusement.

Writer Michael Standaert, who attended the ceremony together with his two kids, took a picture of the kindergarten's flagpole, adorned with a red Chinese flag.

So before our kids got out of kindergarten for the summer, there was 10 days of military "activities" and displays of machine guns and mortars at the door; now the principal has welcomed them back with a strip pole dance on the flagpole bearing the PRC flag. She's gone nuts. pic.twitter.com/BJr4UI6Oq3

He has also shared a clip of a performance, in which a woman dressed in black crop top and black shorts was filmed gyrating around the flagpole as stunned children looked on.

Who would think this is a good idea? We're trying to pull the kids out of the school and get our tuition back. They wouldn't give us the number of the company that owns the school, but looking into that. pic.twitter.com/vEdIhuq774

According to him, ads for a pole dancing school have also been displayed in the kindergarten.

And they also had a bunch of adverts out for a pole dancing school. The gals in the videos, except for the first one, were not the principal. pic.twitter.com/xj56WegTxG

He detailed that the head teacher, identified as Ms. Lai, was removed from her post after parents complained to the police and revealed the kindergarten's questionable entertainment choice to the media.

The principal hung up on my wife when she called after saying it was "international and good exercise"… okay, yeah for adults maybe, but not 3-6 year old kids. pic.twitter.com/OAw8S5ihzX

The principal has tried to defend the highly-controversial dance routine, calling it a good international exercise.