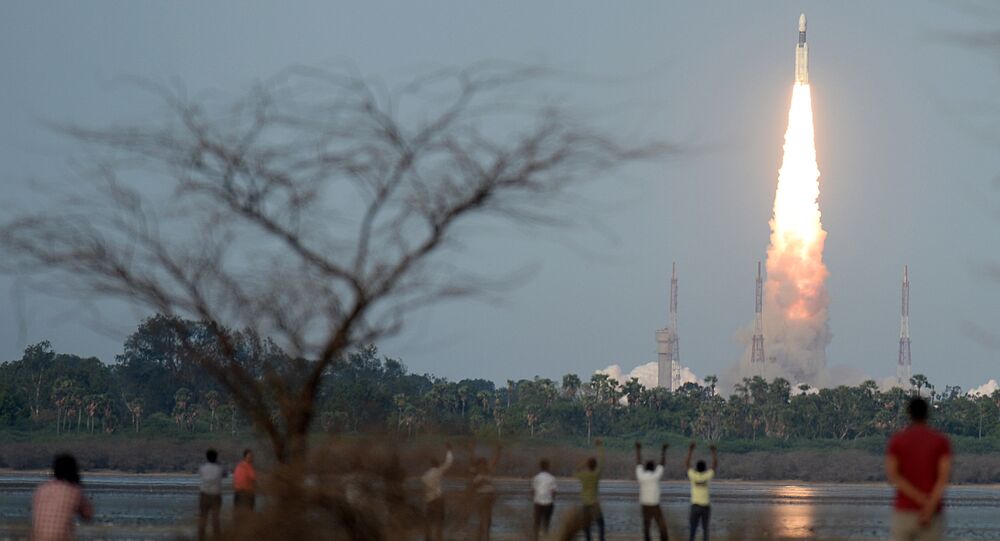 The ISRO is developing a small rocket of not more than 100 tons that can send a 500 kg satellite into a 500 km orbit. The ISRO, which is earning around $40 million annually through launching small satellites of foreign customers, aims to increase its revenue manifold by using the baby rocket.

New Delhi (Sputnik) — The small satellite launch vehicles (SSLV) will not require a mission control center to launch satellites into orbit; a personal computer would be more than enough for this purpose, the Indian Space Research Organisation (ISRO) said on Wednesday.

"SSLV does not require mission control center to launch the satellite. It can be launched from some personal computer anywhere," K. Sivan, chairman of the ISRO, said.

As over 6,200 small satellites are expected to be launched by different countries over the next decade, with a market value of around $30 billion (Euroconsult report 2017), the ISRO's SSLV is conceptualized to tap into this potential market.

"Definitely, India should be able to attract more global customers in this segment. Besides, it will also allow ISRO to concentrate on their back job that is Research and Development as the private sector is being involved in the project," Ajey Lele, a senior fellow at the Delhi-based Institute of Defense Studies and Analyses (IDSA), told Sputnik.

© REUTERS / P. Ravikumar
India’s First Manned Space Mission to Focus on Micro-Gravity Experiment
The ISRO is set to begin launching the small satellite launch vehicles from mid-2019. The SSLV is estimated to cost one-tenth of a normal Polar Satellite Launch Vehicle (PSLV), which costs anywhere between $25 million to $75 million. The 100-ton SSLV will be assembled innovatively in only three days instead of the usual 60 days and by six people instead of 600.

Next year we will be launch SSLV, a small vehicle which will be assembled innovatively in only 3 days instead of the usual 60 days and by 6 people instead of 600: Kailasavadivoo Sivan, Chairperson @isro #ISRO #IndiaInSpace @DrJitendraSingh pic.twitter.com/0Ol7kPxGV5

"SSLV's launches will commence sometime in mid-2019. We want to involve the private sector from the beginning and will be offering them development and launches," K. Sivan, chairman of the ISRO, said while addressing a press conference to announce the 6th edition of the Bangalore Space Expo, 2018.

As the small rocket can be assembled in three days, the ISRO hopes to achieve 50-60 launches a year. The rocket, which is currently in the development phase, will be given to the industry for mass production.

"Antrix is looking at 50/60 launches SSLVs a year and in the next 10 years, we see a business potential of around $300 million annually," Rakesh Sasibhushan, CMD Antrix — the commercial arm of the ISRO, said.

At present, spare capacity available on the missions meant for launching the national satellite is being utilized for launching satellites of other countries on a commercial basis through Antrix corporation limited. To date, the ISRO has successfully launched 237 foreign satellites, mainly very small ones, from 29 countries, using PSLV.