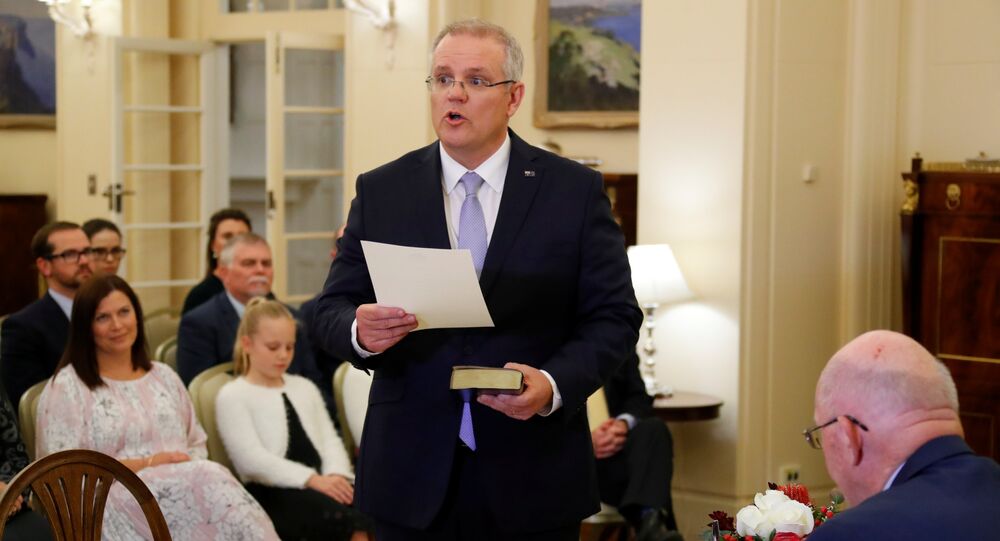 MOSCOW (Sputnik) - Former Australian Treasurer Scott Morrison was sworn in as the country's prime minister in the Government House, located in the country's capital of Canberra, on Friday, finalizing the ouster of Malcolm Turnbull, The Guardian newspaper reported.

According to The Guardian, Morrison was sworn in by Australian Governor-General Peter Cosgrove. Newly-elected deputy leader of the Liberal Party Josh Frydenberg was sworn in as treasurer, The Guardian reported.

Earlier in the day, the ruling Liberal Party elected Morrison as its leader to replace Turnbull in a secret snap election, thereby making the former treasurer the country's prime minister. Morrison secured his victory with 45 votes, while his opponent, former Home Affairs Minister Peter Dutton, got 40.

© AFP 2021 / TORSTEN BLACKWOOD
Australian Lower House's Work Suspended Over Government Row - Reports
Turnbull is leaving office following a long period of tension over social policy with the conservative wing of his party. On Tuesday, the former prime minister secured a narrow victory over Dutton in a leadership vote initiated by the latter, but two days later, Dutton called on him to hold a second vote. Turnbull responded by agreeing to call a new party meeting if he received a letter with signatures of the majority of party members. He also pledged to treat such a letter as a vote of no confidence and not run in the election upon its receipt. Since 43 Liberal Party members signed the petition, the second vote was held.

Fifty-year-old Morrison has held several positions in the country's government since the beginning of his political career. Before becoming treasurer in 2015, he served as immigration and border protection minister, and also social services minister.