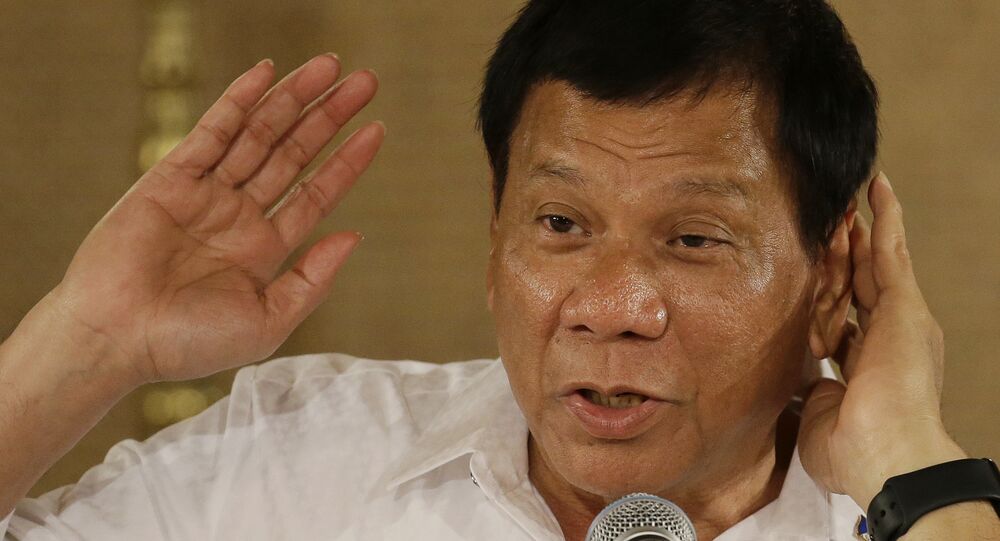 Philippine President Rodrigo Duterte has blamed the United States for trying to hamper the modernization of his country's army and for criticizing his crackdown on illegal drugs.

Rodrigo Duterte has dismissed as “utterly useless” an offer by the US defense chief and other top US officials to buy F16 fighter jets arguing that his country needs lighter aircraft to fight insurgents.

The Philippine president referred to a letter to this effect he had earlier received from US Defense Secretary James Mattis, Secretary of State Mike Pompeo and Commerce Secretary Wilbur Ross.

"What I need are just propeller-driven planes for anti-insurgency. We don't need F16 and yet they dangle before us after they insulted us," Duterte said during a televised speech atin a military ceremony marking the Eastern Mindanao Command’s anniversary in Davao City.

Duterte also described the letter as an attempt by Washington to “make up” for its previous jabs at his government.

© AFP 2021 / Ted Aljibe
'Who Are You to Warn Us?' Duterte Rebukes US Advice Not to Buy Russian Subs
While acknowledging that the US and Philippines have special ties, Rodrigo Duterte said he found the term "friends" hard to stomach.

Duterte repeated his frustrations with the US, including a refusal to deliver about 23,000 rifles for the Philippine’s police after some US lawmakers raised concern over Manila’s police-led crackdown against illegal drugs.

Previously, Duterte railed against US Assistant Defense Secretary for Asian and Pacific Security Affairs Randall Schriver who cautioned Manila not to buy military hardware from Russia.

READ MORE: I Believe in God But the War Against Drugs Made Him My Enemy — Duterte

He made the remarks amid media reports that Moscow had offered the Philippine government its help in purchasing Russian submarines and that Manila was considering the proposal.

During a visit to Russia in 2017, President Duterte expressed interest in advanced Russian weapons, including helicopters, planes, as well as precision-guided weapons to help combat the threat of terrorism.