Dozens of Korean Families to Have Almost Week-Long Reunion - Reports

Following a rapid diplomatic thaw on the Korean peninsula, 89 elderly and frail South Koreans will meet their family members in Mount Kumgang resort in North Korea on Monday, almost seven decades after they were separated by the Korean war that kept the peninsula and relatives divided, local media reported.

Since 2000 the two warring nations have held 20 rounds of reunions, but time is running out for many aging family members, Yonhap news agency reported Saturday. This week's event is the first since October 2015.

The 89 chosen to participate in the event represent just a tiny group of the estimated 57,000 people waiting to reconnect with loved ones in the North. According to Yonhap, many are in their 70s or older, indicating that the "window of opportunity is fast closing down" to meet relatives before they pass away. 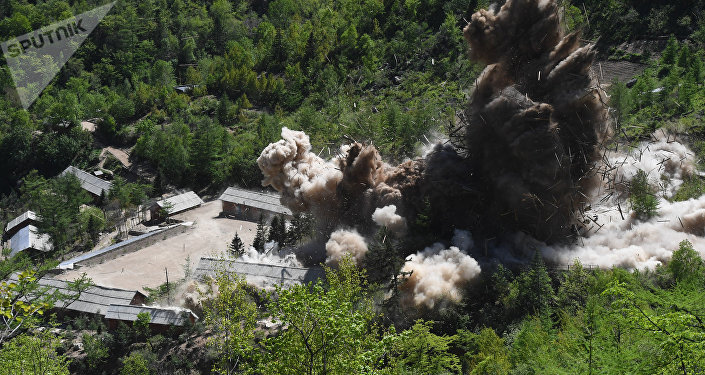 © Sputnik / Ilya Pitalev
US Sees Formal End of Korean War as Long Process Including Denuclearization – Researcher
In the months leading up to this Monday's event, many people had to give up those dreams and instead be satisfied to see relatives who they have not seen before.

Particularly, Park Hong-seo, 88, wanted to see his older brother again when he applied for a family reunion. He was later informed that his brother had died in the mid-1970s.

Koh Ho-joon, a 77-year-old man who hoped to meet his older brother, learned that he had been reported dead long ago. However, Koh  is still looking forward to meeting his brother's wife, after the family was separated in the middle of the mid-20th-century Korean War hostilities.

"When applying, I worried that my brother was killed during the war, but fortunately I heard that he had lived until 44 years old," Koh  said, adding, "I heard that his wife remains alive at the age of 82. I am so grateful for her. She has taken care of her kids all by herself," cited by Yonhap.

© AP Photo / Korea Summit Press Pool
Pyongyang 'Frustrated' Over Delay in Peace Treaty Signing to End Korean War
South Korean participants will reportedly be reunited with family in North Korea from Monday to Wednesday, followed by a reunion of 83 North Koreans with their South Korean families from Friday to Sunday. During each of the two three-day reunion sessions, families are expected to have a combined face time of around 11 hours, Yonhap reported.

Millions were swept apart by the 1950-53 Korean War, which divided brothers and sisters, parents and children, and husbands and wives while perpetuating division on the Korean peninsula.

The situation on the Korean Peninsula has significantly improved within the last several months, with North Korean leader Kim Jong-un holding two rounds of talks with South Korean President Moon Jae-in as well as a top-level summit with US President Donald Trump in Singapore.

In particular, the parties agreed to work toward denuclearization on the peninsula and sign an official peace treaty to end the Korean War in 2018, to mark the 65th anniversary of an armistice reached between North Korea, China and the United States on July 27, 1953.