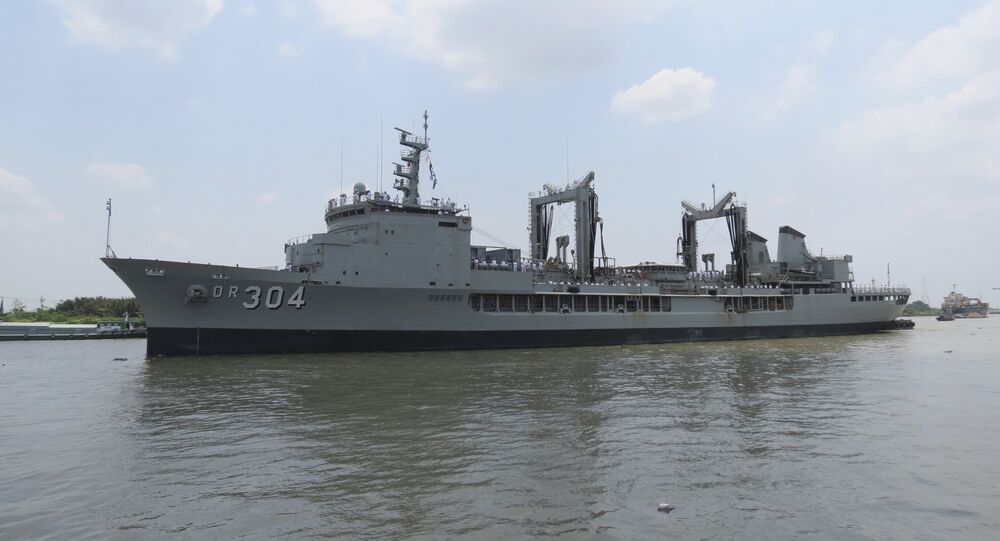 Amid a growing race for power projection in the Pacific, the Royal Australian Navy is undertaking its most expansive retrofit since World War II, ordering up some of the most advanced anti-submarine warfare systems on the planet and planning to take delivery of a new vessel every 18 to 24 months for the next two decades.

Australia's Naval Shipbuilding Plan, released in May 2017, details an ambitious investment in naval warfare, with over $65.3 billion being set aside for vessel construction and close to another $1 billion for shipyard renovations and work crew retraining.

The plan calls for procuring two landing helicopter docks — aircraft carriers in all but name — plus a dozen new submarines and nine new frigates, a vast expansion of anti-submarine warfare capabilities that follows on the heels of a replacement and upgrading of all three helicopter types used by the service in the last five years, Asia Times noted.

The Canberra-class helicopter landing docks, 27,000-ton vessels with ski jumps that can carry 18 helicopters, were completed in 2015 and are already in service with the RAN.

China's People's Liberation Army-Navy submarine fleet is expected to reach 70 boats by 2020 according to Canberra's 2016 Defense White Paper, which also projected that in the next two decades, half the world's submarines will be operating in the Pacific Ocean. Australia being an island, this makes anti-submarine warfare (ASW) a top priority.

The RAN announced in June it had signed a $25.4 billion contract with British defense firm BAE Systems for nine advanced ASW frigates modified from the British Type 26 frigate, to be known as the Hunter-class frigate once in RAN service. Full production is expected to begin in 2022, to begin replacing their Anzac-class frigates.

An ASW capability was the highest priority for the Royal Australian Navy, according to Chief of Navy Vice Adm. Tim Barrett, Defense News reported at the time. "I spoke as recently as last night to the first sea lord, my equivalent in the [British] Royal Navy, and I am assured by his comments on just how successful this platform will be as the world's most advanced anti-submarine warfare frigate."

"This is a decision entirely based on capability, the best capability to equip the navy in anti-submarine warfare," Minister for Defense Marise Payne said June 29 at a presser at at the ASC shipyard in Osborne, South Australia.

Further, the RAN is also in talks with French naval construction firm Naval Group, formerly known as DNCS, to obtain a dozen smaller variants of the French Barracuda-class attack submarine, dubbed the Shortfin Barracuda, and powered by a diesel engine instead of nuclear power, as the French subs are. The Shorftins are projected to set Canberra back by about $50 billion.

"While exact details remain confidential, DCNS can confirm the Shortfin Barracuda is over 90 meters in length and displaces more than 4,000 tons when dived," Sean Costello, CEO DCNS Australia, said in a 2015 press release. "If selected, the Shortfin Barracuda will remain in service until the 2060s, and the Block 1A platform will be updated and upgraded with new technology developed in France and Australia."

Australia's naval initiative is taking place amid a perceived strategic vacuum in the region, as the US seems to vacillate on regional defense obligations due to US President Donald Trump's "America First" policy and China's naval expansion and expansion of its sphere of influence in the South and East China seas. Former Australian Prime Minister Tony Abbott warned in July, following Trump's snubbing of NATO allies in Europe, that "American values can be relied upon but American help less so… This need not presage a darker time, like Rome's withdrawal from Britain, but more will be required of the world's other free countries. Will they step up? That's the test," he said at the Heritage Foundation.

"While there is concern that Australia risks becoming a casualty of US-China rivalry, it is clear on both sides of politics that China, not the US actions, is to be feared," Binoy Kampmark, senior lecturer at the School of Global, Urban and Social Studies at the Royal Melbourne Institute of Technology, told Sputnik in an email Wednesday. What he called "striking," however, was the lack of criticism of Australia's huge recent outlays to upgrade its sea power, "other than [from] activist groups who insist that Australia is too closely aligned to Washington's interests."

"Australian diplomacy in recent years has been trying to capitalize on the fears of various Asian countries (Vietnam, Malaysia, Singapore) on the rise of China, though it always subordinates this to Washington's dictates," Kampmark said.

The temporary panic in April about a possible Chinese military base on the island nation of Vanuatu, about a thousand miles east of the Australian mainland, fanned the flames of Sinophobia, even though the facility in question turned out to be for tracking spacecraft, the South China Morning Post reported.

Abbott, under whose prime ministership several of the above-mentioned procurement contracts were signed, advised that the Australian government should increase its defense spending beyond 2 percent of its GDP and use Singapore as a forward operating base, from where "they are more readily to be where they could be needed," The Australian noted at the time.

The Australian Navy's relationship with China's PLA-N has been anything but consistent, though. In April, three RAN warships en route to Vietnam had polite but "robust" verbal exchanges with the PLA-N while transiting an area of the South China Sea claimed by China, the Australian Broadcasting Corporation noted at the time.

However, on July 31, Australian Defense Minister Marise Payne announced that the Chinese would be sending several ships to participate in their Exercise Kakadu naval war games in September. During the drills, which will not feature live-fire exercises, the Chinese ships will participate in testing, inter-ship communications and ­rep­len­ishment activities and sea-training maneuvers with 25 other nations, the Australian noted.

"The insistence on freedom of navigation and a ‘rule-based' order from Canberra, which is very much simply code for preventing various military actions from taking place on Beijing's part, suggests that Australia is being asked to perform a deputy policing role in the Asia-Pacific region, one it has traditionally performed for its US allies," Kampmark said.

However, the RAN has rarely operated alone, typically functioning as part of a larger task force with the US Navy, and even its expanded naval register won't be able to cover all the necessary parts of the Pacific by itself, Asia Times noted.

"Geopolitically, the surge in arms building is already having ramifications on the arms industries of various countries. Japan, for instance, expressed interest in putting in a bid for the Australian submarine contract which eventually went to a French company," Kampark noted.

"But in a broader sense, the this spike in expenditure does not augur well for stability, and history shows that surges in arms building from several states in proximity can lead to dire consequences."