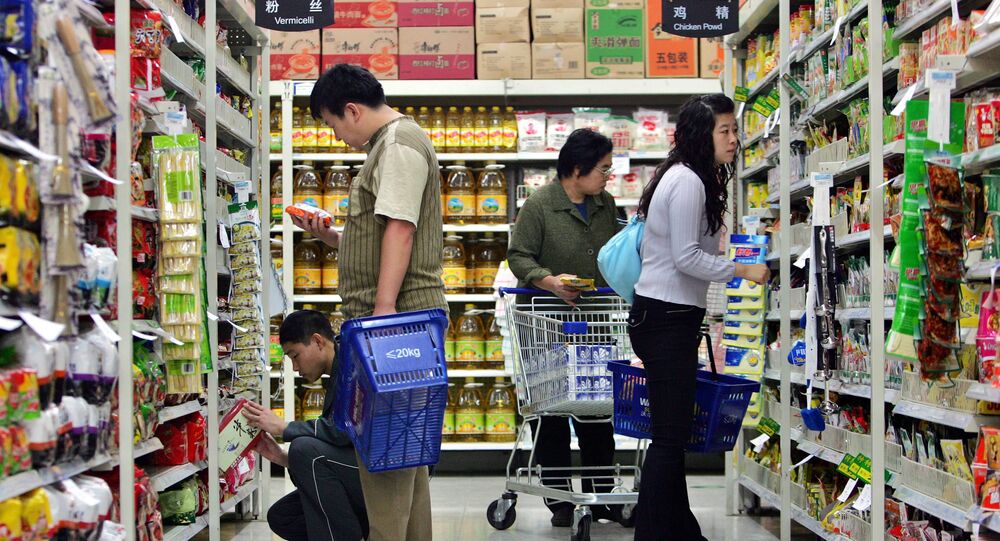 Although indicators showed business activity cooled some-what in July, the Chinese economy is expected to remain robust over the coming months, supported by more targeted measures to buttress growth, said officials and economists.

As consumption, industrial output and fixed-asset investment all showed some softening signs in July, stronger and more coordinated efforts were needed "as soon as possible" to improve "weak links" in the economy, according to analysts.

They noted that the central government has pledged to fine-tune macroeconomic policies by putting more emphasis on fiscal spending and boosting domestic demand.

© AFP 2020 / FILES
China's SatCom Launch Marketing Not Limited to Business Interest - Think-Tank
Retail sales increased by 8.8 percent in July from a year earlier, slowing from 9 per-cent year-on-year growth in June, according to the National Bureau of Statistics on Tuesday.

The data pointed to some waning of demand for such goods as cosmetics and mobile phones.

Industrial output growth has been pressured by the government's stringent pollution curbs in the first half and uncertainties regarding the global trade outlook amid the ongoing China-US trade dispute.

Fixed-asset investment rose 5.5 percent year-on-year during the January to July period, 0.5 percentage point slower than that recorded in the first half.

© AFP 2020 / YASUYOSHI CHIBA
US Soybean Business Warns Trump About Risks Posed by Trade War With China
The July data comes after policymakers decided to roll out more targeted measures to tackle economic challenges and assuage concerns over any cooling of the economy, while they continue to do more to curb financial risks.

According to a meeting of the Political Bureau of the Communist Party of China Central Committee held last month, efforts should be made to keep employment, the financial sector, foreign trade, foreign and domestic investments and overall expectations stable.

Changes have been made to keep growth on track, including efforts to lower financing costs and improve funding of small businesses and private firms, and increase demand for investment at the local level.

Wang expects infrastructure investment to see a major rebound and contribute to growth.

"Further decline of investment and consumption in July means policies need to be adjusted at a quicker pace," said Liu.

"While earlier data show financial conditions seemed to relax slightly in July, a lower-than-expected level of economic activity points to the need to improve coordination across departments to stabilize growth and avoid a 'vicious circle' caused by the tightening of financial conditions in the past few months," Liu added.

Despite concerns the government might go back to the old strategy of relying on debt-fueled growth, Gao Ting, head of China strategy at UBS Securities, said he expects the government will not allow a major monetary stimulus and will stick to its deleveraging campaign, as current liquidity levels have met the central bank's target.