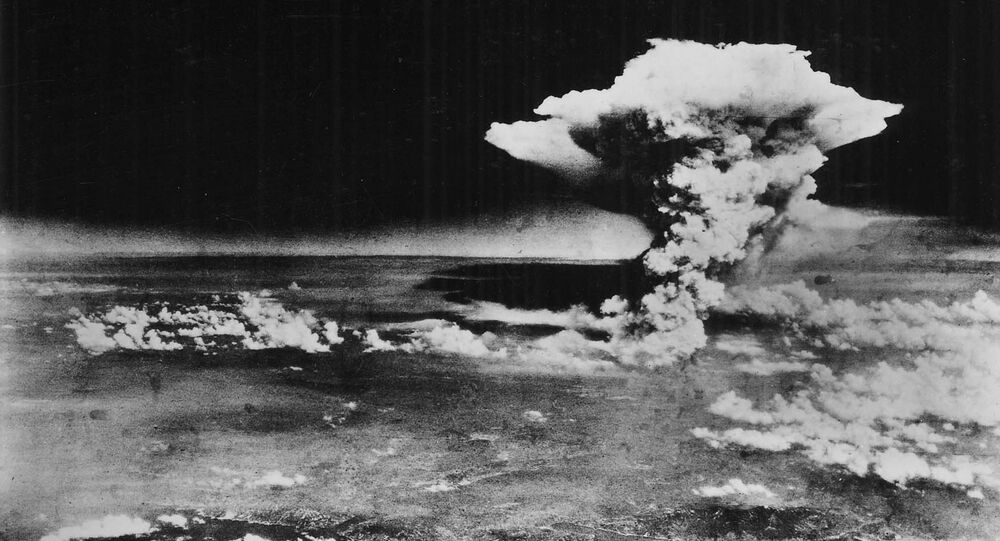 The two bombs almost annihilated two large cities, indiscriminately killing hundreds of thousands of residents. Sputnik recalls these horrible events, which occurred in the final days of the Second World War, and the memories of their survivors.

The Japanese city of Hiroshima has marked the 73rd anniversary of the atomic bombing by the US Air Force that took place during the last days of the Second World War. During the ceremony in the Hiroshima Peace Memorial Park, the country's prime minister, Shinzo Abe, held a speech assuring that Japan, as the only country that has experienced an atomic bombing, will champion the reduction of nuclear weapons in the world.

"Our nation, while maintaining our (non-nuclear weapons) principles, will patiently work to serve as a bridge between the [nuclear and non-nuclear states] and lead efforts by the international community to reduce nuclear weapons," Abe said.

© AFP 2021
A photo dated September 1945 of the remains of the Prefectural Industry Promotion Building after the bombing of Hiroshima, which was later preserved as a monument. (File)

Reiko Yamada, one of the survivors of the event, described what happened that day.

"When the bomb exploded I was in the school yard, 2 kilometers away from the epicenter. The district on the opposite side of the river was completely destroyed. The road from the center of the city was crowded with people running away. Without receiving any proper medical assistance, they fell dead one after another right on the road. In order to clear the road, bodies were raked up in piles in dug up holes right in our school yard and burned as if they were garbage. The same thing happened in other school yards too and the air in the city was thick with the stench of burned flesh."

On August 9, 1945, at 11:01 a.m., another US bomber dropped the 21 kiloton atomic bomb "Fat Man" on another Japanese city — Nagasaki — killing about 40,000 people and leaving 60,000 injured. The casualties would have been greater if the bomb hadn't missed its original target due to weather conditions.

Yoshiro Yamawaki survived the blast in a bomb shelter and recalls the aftermath of the bombing which he saw, as he and two of his brothers went looking for their father, who never came home from his shift at a factory that stood half a kilometer from the epicenter.

"On the bridge we saw rows of dead people standing, leaning against the railings on both sides. They were standing with their heads bowed as if they were praying. Dead bodies were flowing down the river, too. In the factory we found the body of our father — it looked like his dead face was smiling."

Those who survived the bombings were not left unscathed either — around 200,000 people were irradiated and either died of or suffered from related diseases for the rest of their lives, raising the casualties to almost half a million, according to some estimates.