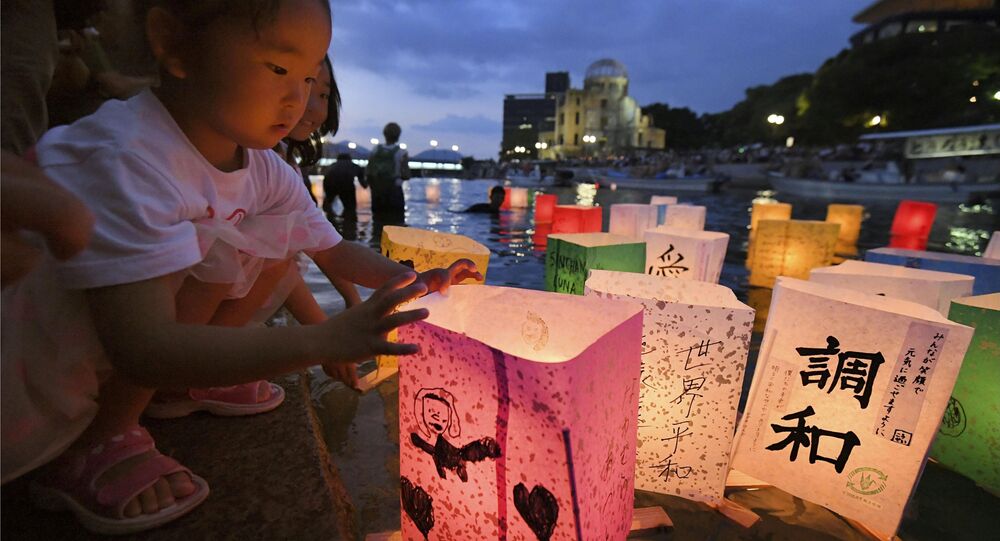 MOSCOW (Sputnik) - On Monday atomic bomb survivors' groups in Japan met with Prime Minister Shinzo Abe and requested that their country, which is the only nation in the world to have experienced atomic bombings, join the UN Treaty on the Prohibition of Nuclear Weapons (TPNW), the NHK broadcaster reported.

According to the broadcaster NHK, the meeting with atomic bomb survivors' groups took place after the Peace Memorial Ceremony in Hiroshima.

The representatives from seven such groups reiterated the need for steps aimed at the elimination of nuclear weapons, especially in light of North Korea’s commitment to denuclearization announced at the Washington-Pyongyang summit in Singapore, the media outlet reported.

Abe, in turn, expressed his support for the goal of eliminating nuclear weapons and pledged to urge both nuclear and non-nuclear countries to join the treaty, the broadcaster stated.

© AP Photo / Jon Chol Jin
North Korea Has Not Stopped Its Nuclear Program, Violates UN Sanctions - Reports
After the meeting, the head of the survivors' group in Hiroshima, Kunihiko Sakuma, noted that the prime minister’s reaction had demonstrated that he had not given the idea much thought. Sakuma vowed that his group would request next year that the Japanese government join the treaty, NHK added.

Earlier in the day, Abe said that Tokyo had not reversed its decision on non-participation in the treaty. He noted that, even though the country backed the cause promoted by the treaty, the participation of nuclear powers was needed to rid the world of nuclear weapons.

The TPNW was adopted on July 7, 2017, at a UN Conference to Negotiate a Legally Binding Instrument to Prohibit Nuclear Weapons. It contains a set of prohibitions, including an obligation not to develop, test, produce, acquire, possess, stockpile, use or threaten to use nuclear weapons. So far, the TPNW has been signed by 60 states and ratified by only 14.

READ MORE: Iranian FM: 'US Can Only Blame Itself' for Ending Talks on Nuclear Deal

In 1945, the United States dropped two atomic bombs on Hiroshima and Nagasaki, on August 6 and 9 respectively. The bombing in Hiroshima killed about 150,000 people, and the raid on Nagasaki claimed the lives of some 70,000 people.