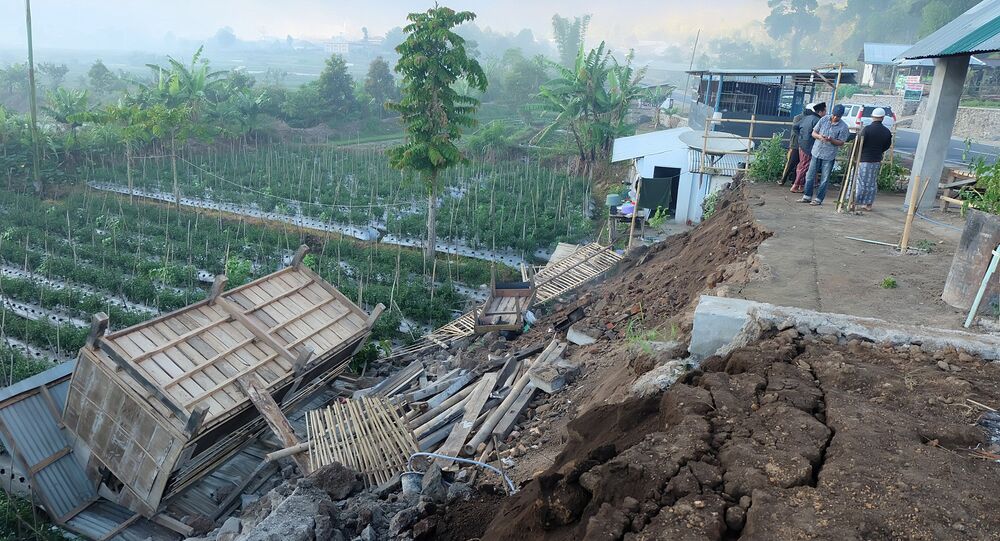 At least 91 people were killed after a 6.9-magnituted earthquake struck Indonesian islands of Bali and Lombok Sunday.

The earlier reports said that 82 people were killed in the earthquake.

© AFP 2020 / RITA SISWATI
Tsunami Warning Issued After Magnitude 7 Quake Hits Indonesian Lombok Island (VIDEO)
According to Haji Rum, head of the West Nusa Tenggara Disaster Management Agency, all fatalities happened at Lombok. As he reported the death toll on Indonesia's Metro TV, he said that all the victims were killed by falling debris inside the buildings.

Evacuation efforts are underway, with thousands of people reportedly being evacuated from the disaster zone, according to Reuters. Thousands of buildings are reportedly destroyed.

The epicenter of the quake was located near Loloa settlement located in north part of Lombok island. The island's largest city, Mataram, population 319,000, is located some 50 kilometers from the epicenter.

However, there are still no information on the injured; speaking on the TV, Rum said that hospitalized patients have been moved outdoors as a precaution. There are no reports of injuries on nearby island Bali, a popular tourist destination.

#Earthquake: Magnitude 6.9 That Hit The Indonesian Tourist Island of Lombok Today Has Killed At least 82 People.
This is Footage From Around The Island of Lombok During The Quake.
Sending Prayers 🙏#PrayforIndonesia#PrayForLombokpic.twitter.com/V5oTsfNDsL

Ferry With 139 Aboard Sinks, Killing Six People in Indonesia (PHOTOS)