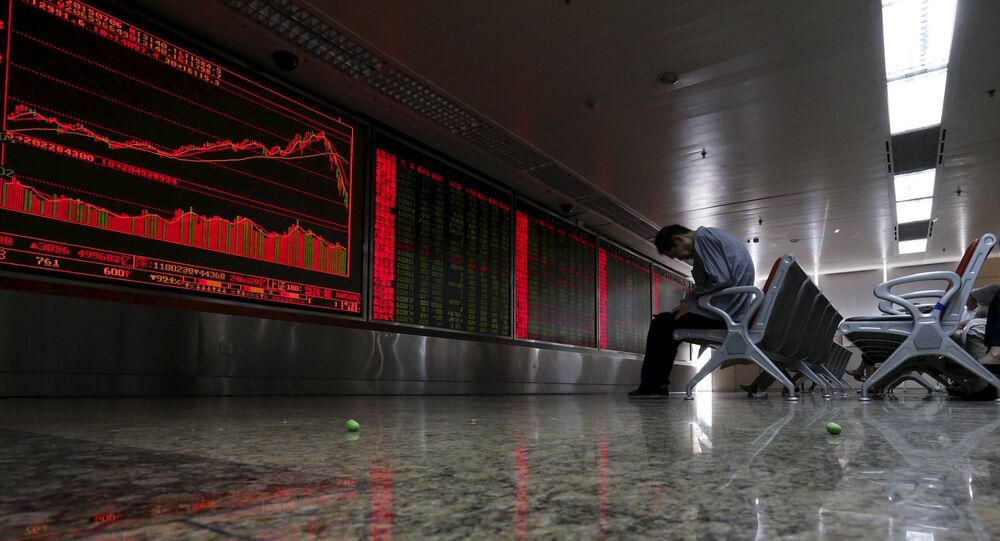 Bloomberg News data showed in intra-day trade the value of equities on the mainland had slipped behind those in the neighbouring country for the first time since taking second position in 2014.

The figuers displayed Chinese stocks were worth $6.09 trillion, compared with $6.17 trillion in Japan. The US has the world's largest stock market at just over $31 trillion, the report said.

© AP Photo / Li Gang/Xinhua
China Wants to Exclude US From War Games With ASEAN in Disputed Area - Reports
Moreover, the Shanghai Composite Index has lost more than 16 percent in 2018 to be among the world's worst perfomers, while local currency, the yuan, has fallen 5.3 percent against the US dollar, Bloomberg reported.

The pressure was increased this week when White House said it was considering more than doubling threatened tariffs on a range of Chinese goods worth $200 billion.

"China supplies to the US market too many goods which can not be supplemented. Even if the United States limits the number of Chinese goods by imposing tariffs, they will have to import these goods from other states, which will not solve the issue of trade imbalance," Wang Yi said.

The parties tried to negotiate a trade deal and agreed to cut the bilateral trade imbalance in May, but the tensions escalated after the United States levied a further 25 percent tariff on Chinese goods worth $34 billion, with Beijing immediately responding in kind.

Chinese Commerce Ministry said in a statement on Thursday that Beijing was absolutely ready to respond to US threats of imposing higher trade tariffs and is prepared to take the necessary countermeasures to defend the country's interests. Chinese Commerce Ministry emphasized that the US "carrot-and-stick" tactic in trade war with China would not work.

China Appeals to US' Common Sense in Trade Dispute, Warns Against Blackmailing